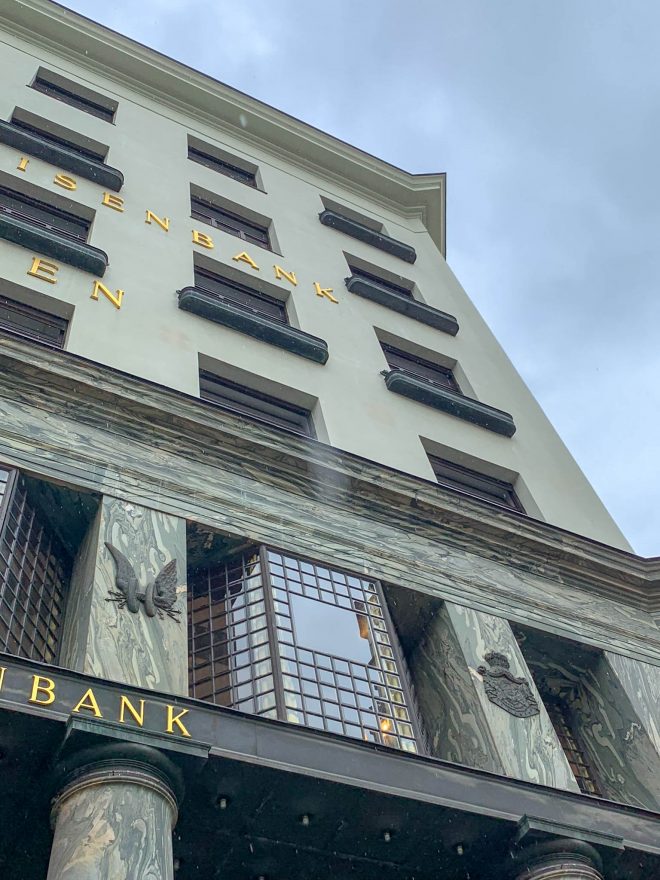 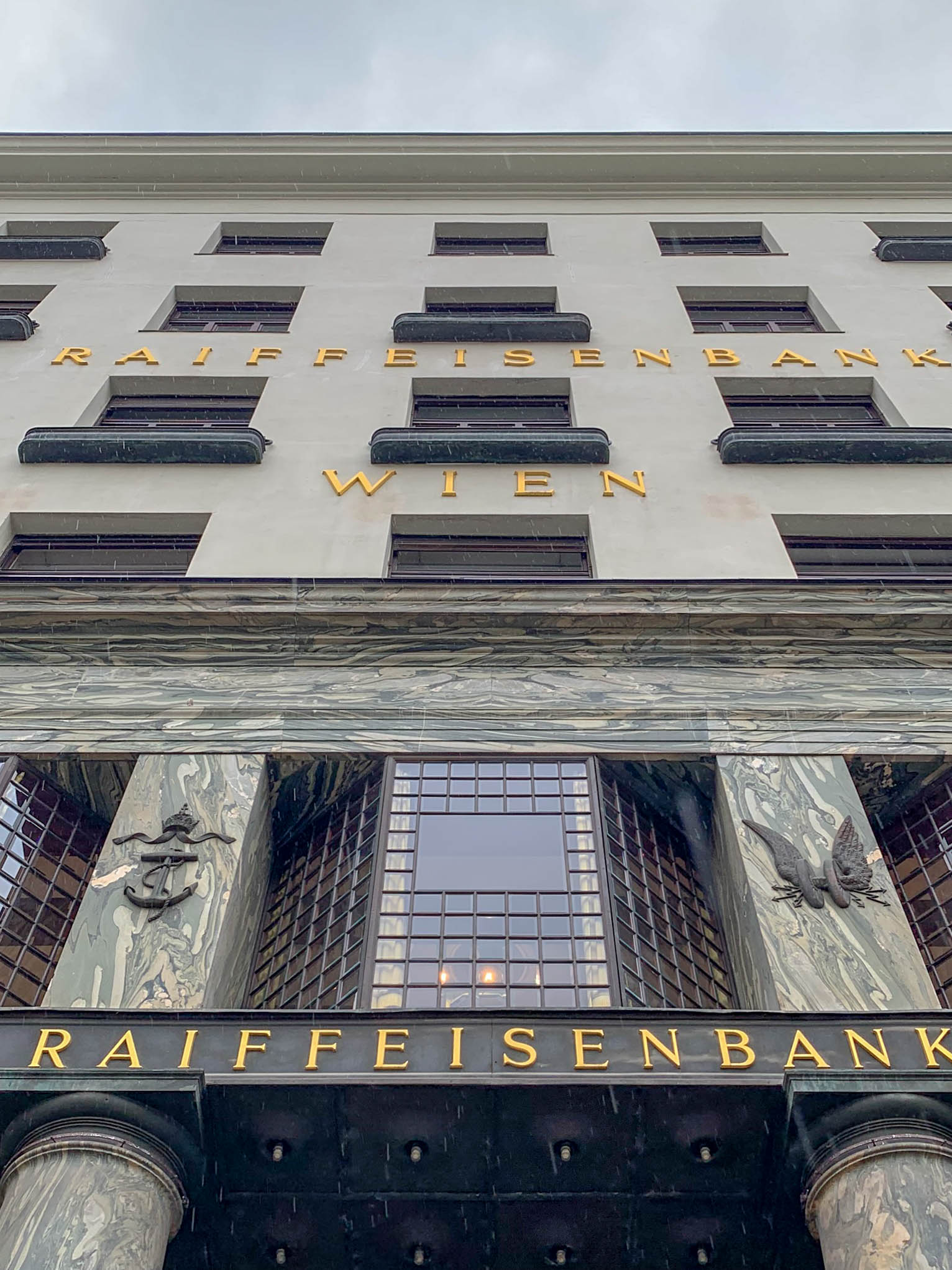 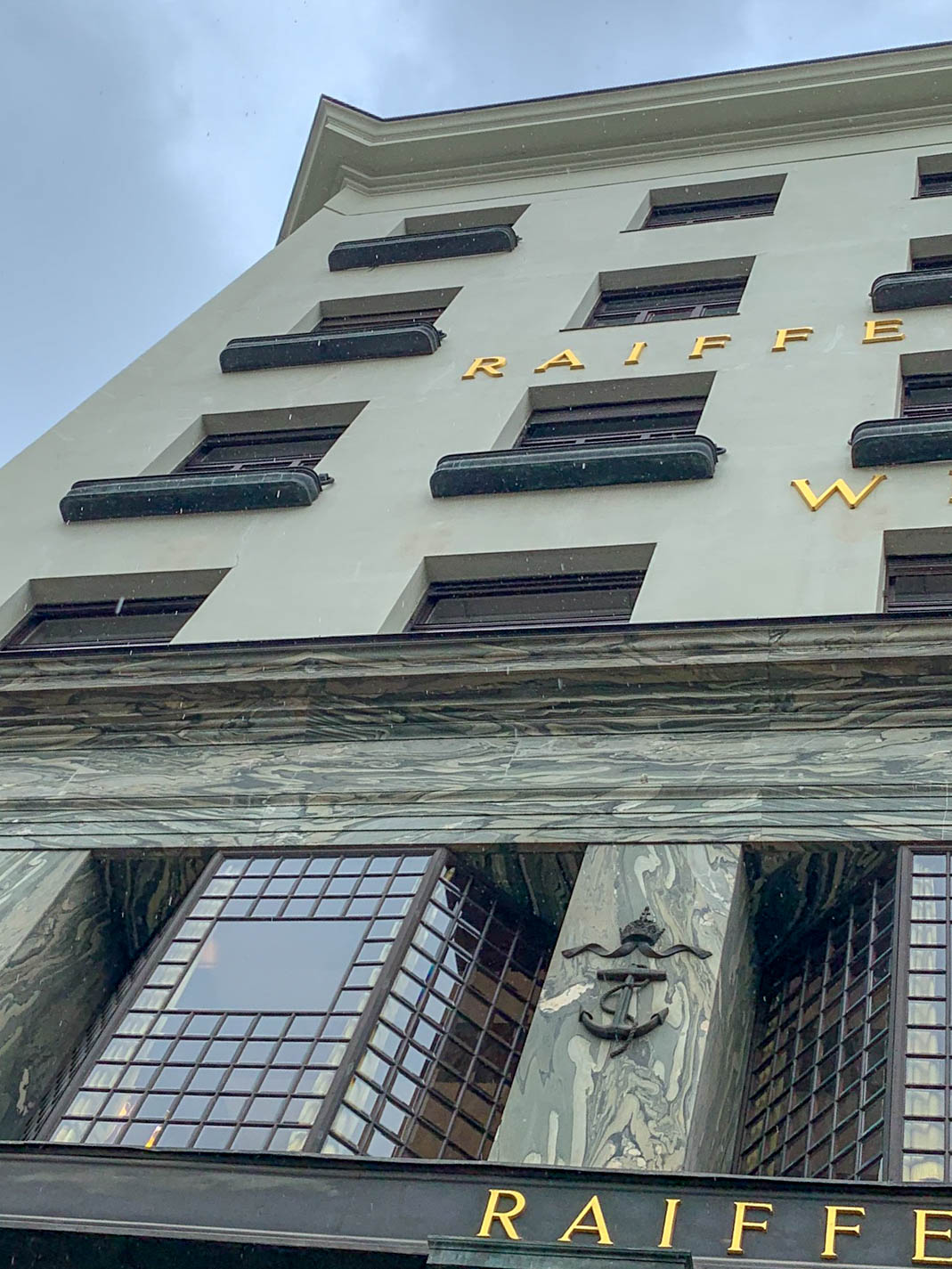 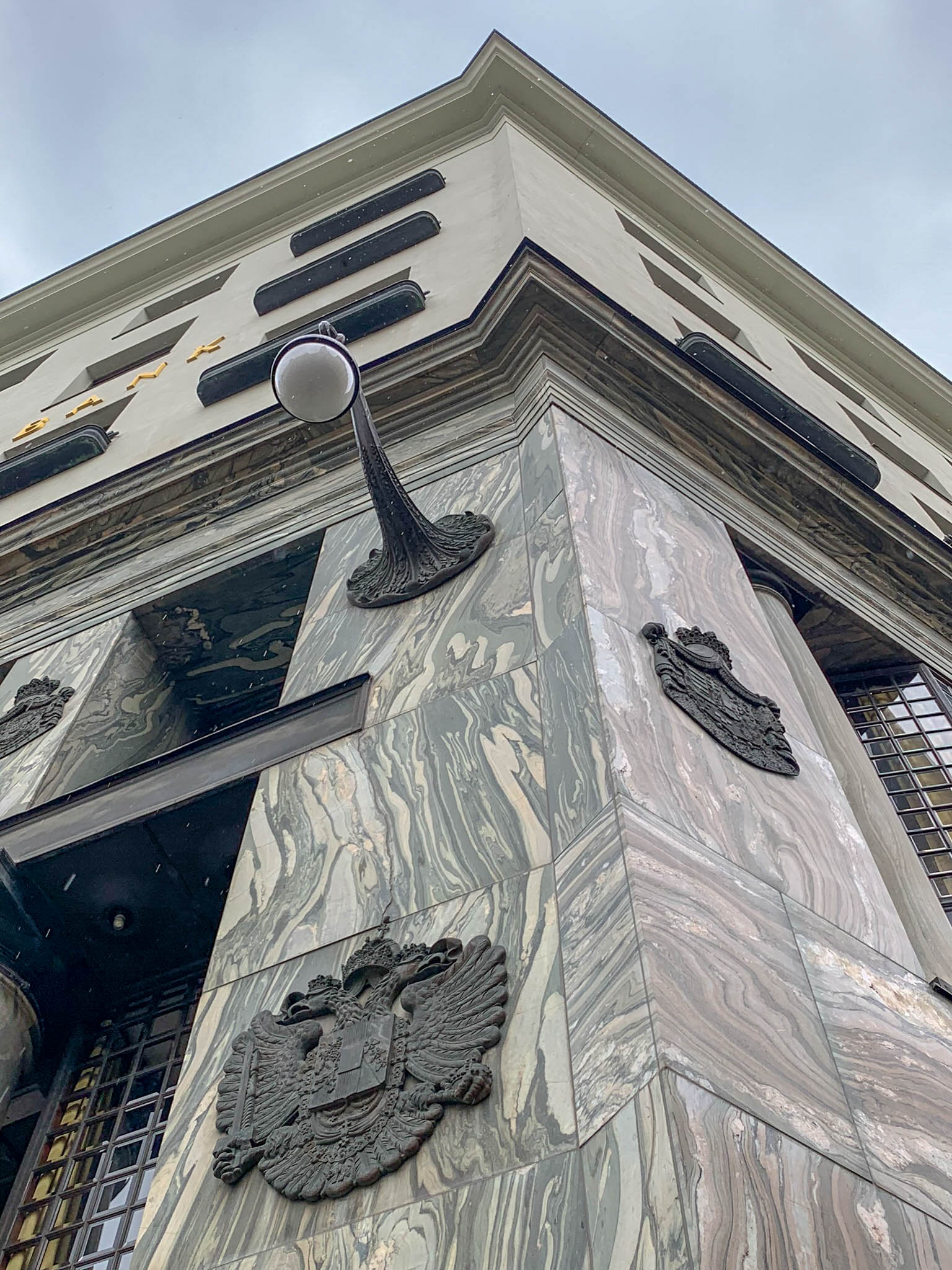 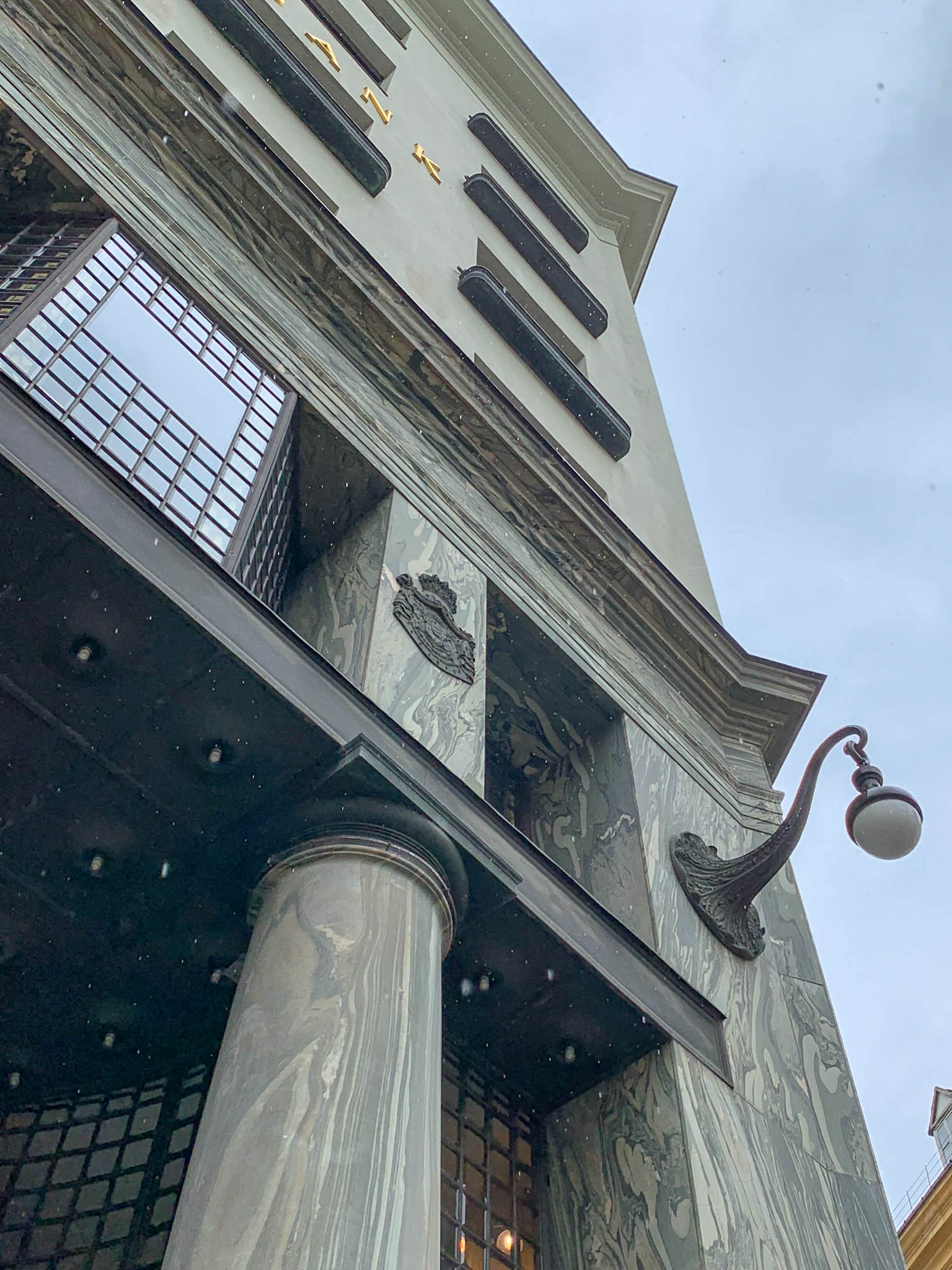 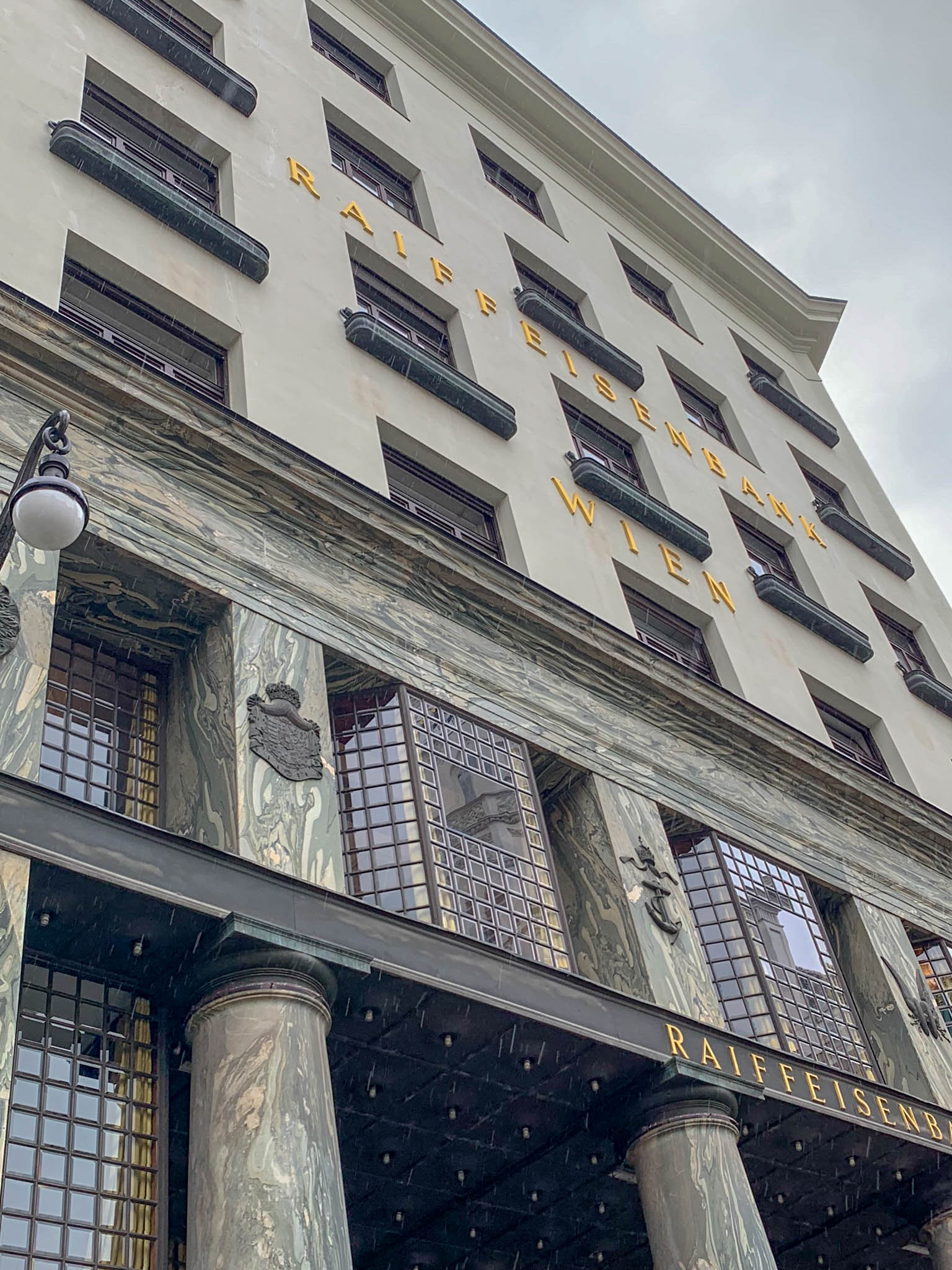 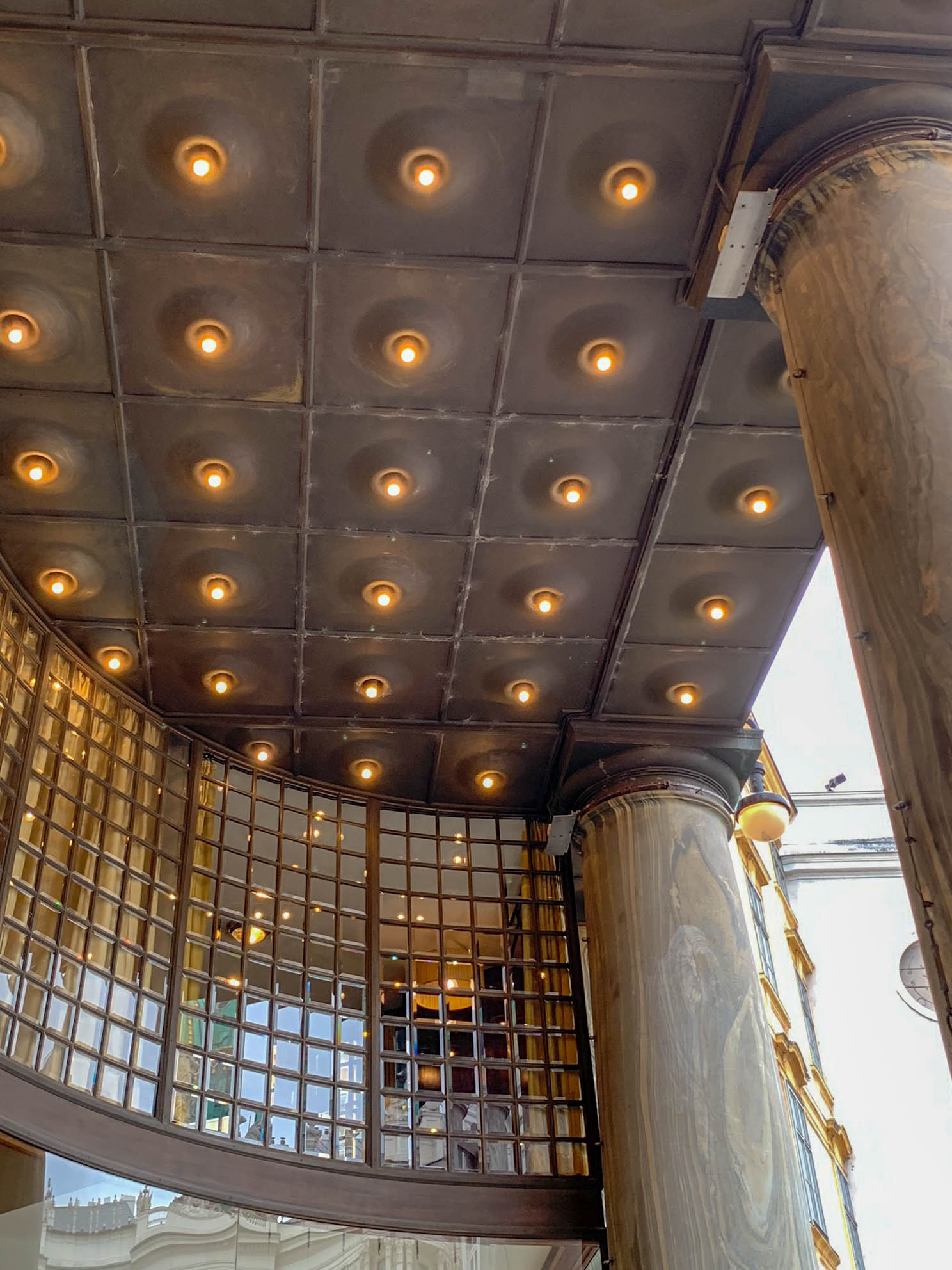 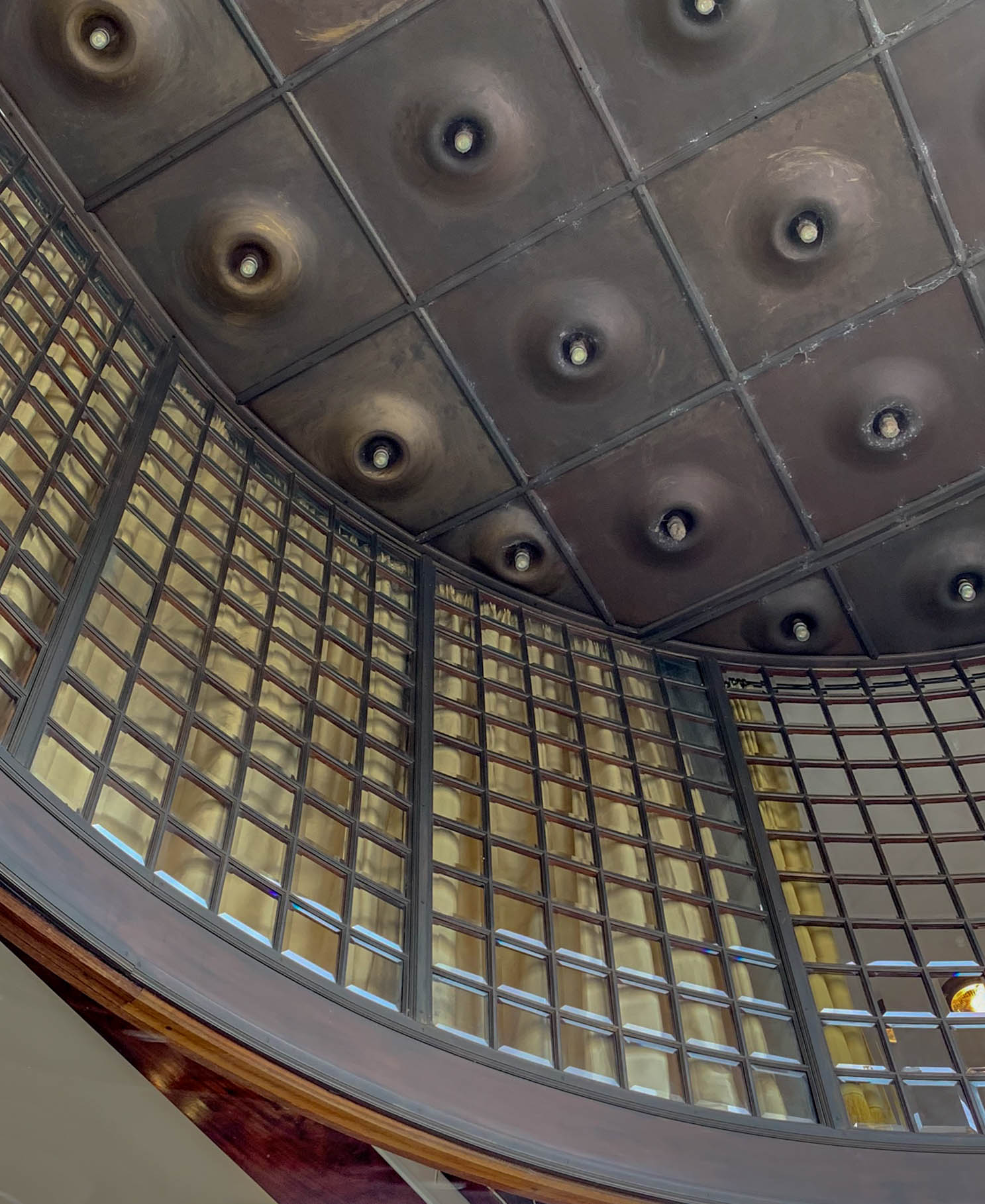 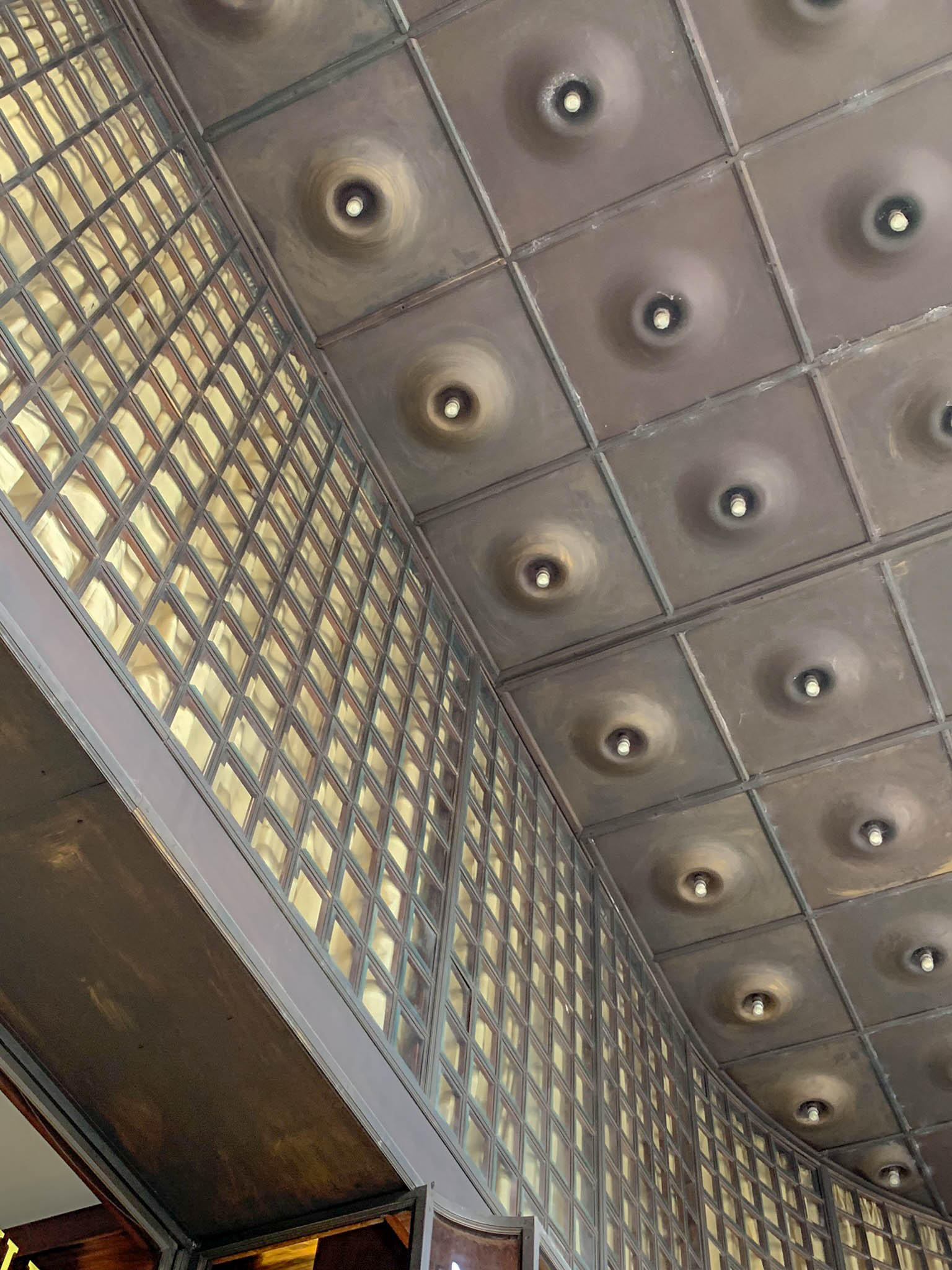 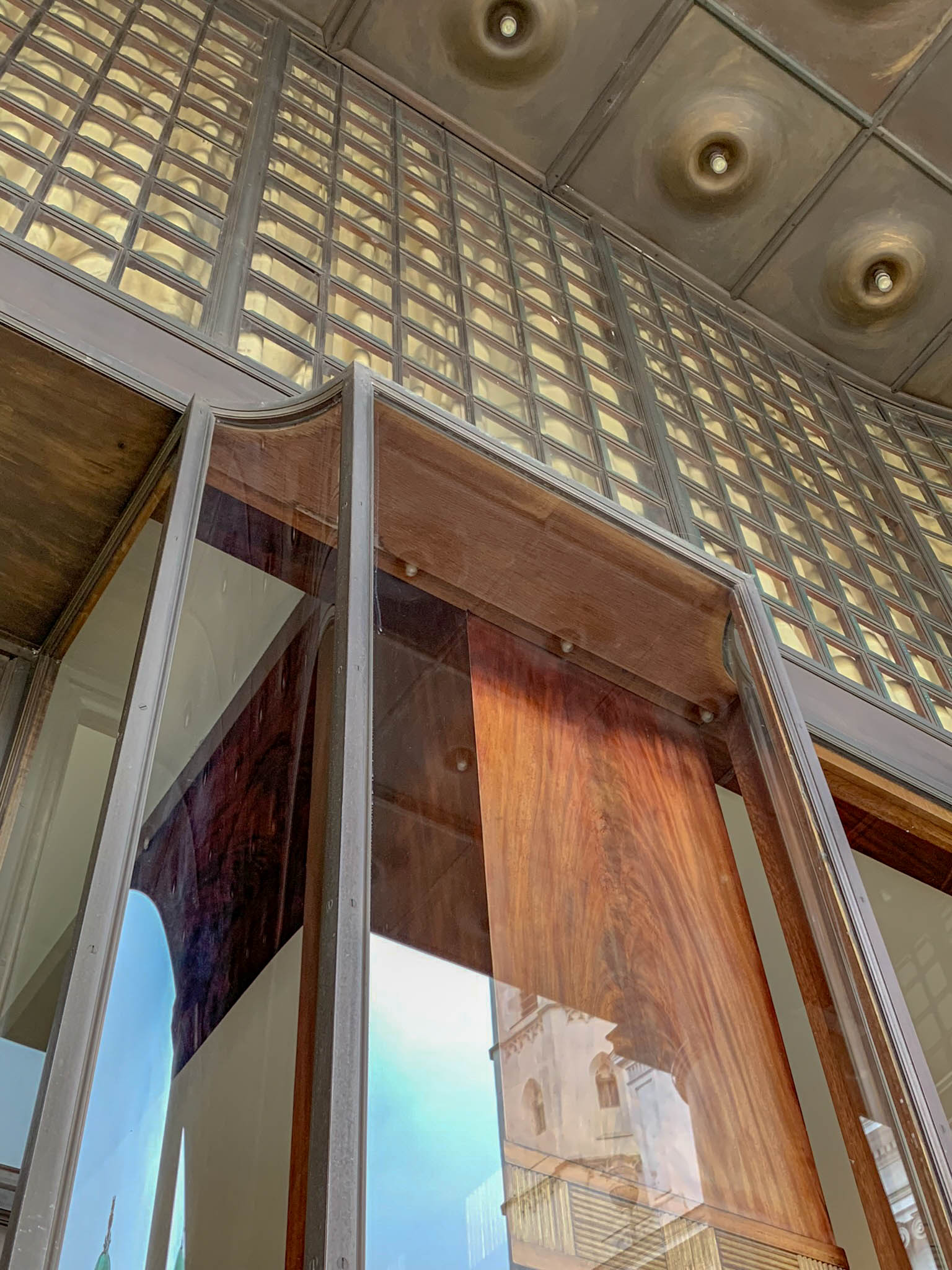 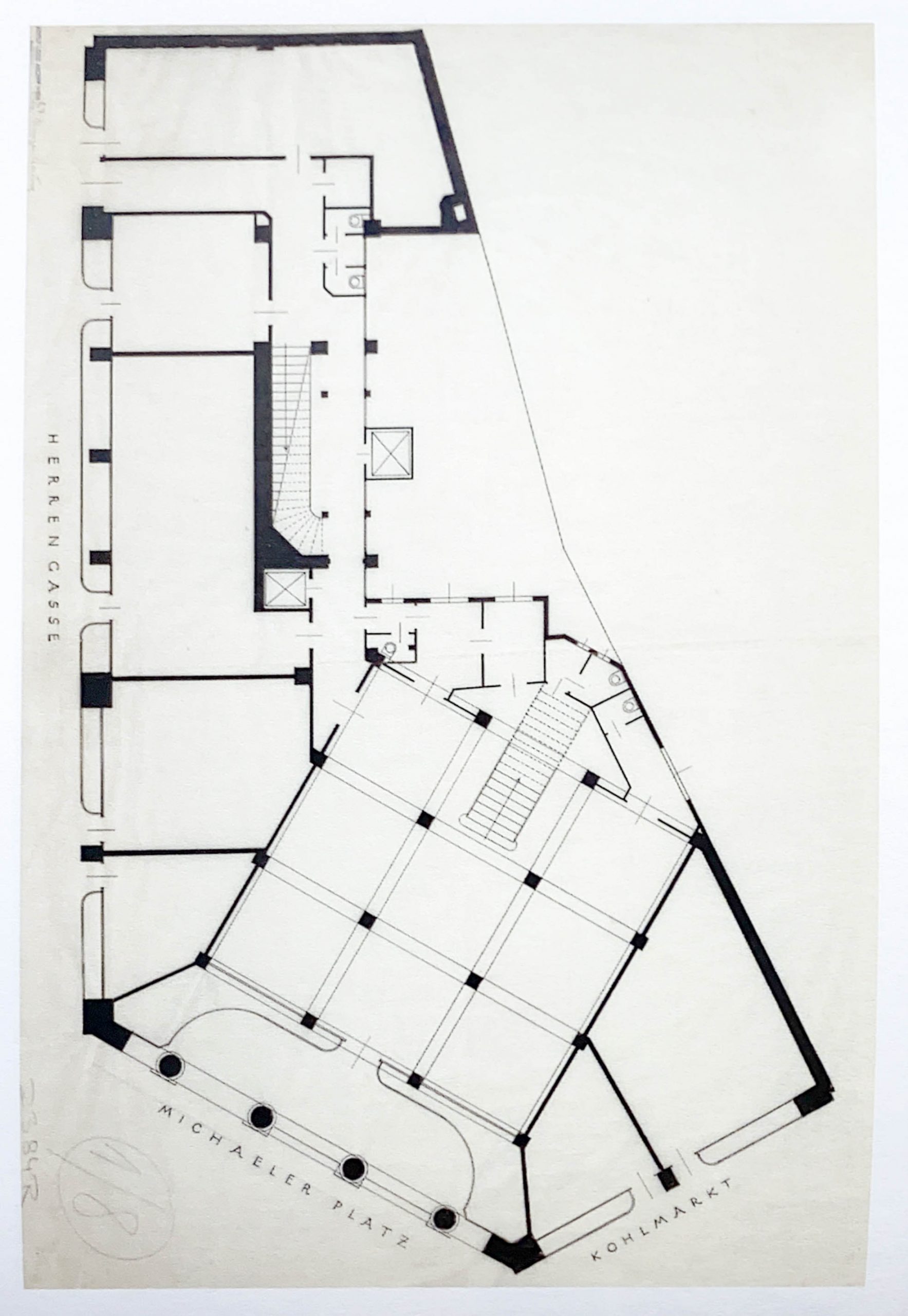 The building on Michaelerplatz, opposite the Hofburg Palace in Vienna, was built between 1909 and 1911 to plans by architect Adolf Loos for the men’s outfitter Goldmann & Salatsch.

Recognized today as one of the most important works of early modernism in the history of archi­tecture, it provoked an excited public debate among contem­poraries due to its radical abandonment of décor.

When Leopold Goldmann commis­sioned the architect Adolf Loos to build a commercial building, Loos was already forty years old and had until then made his living mainly with home furnis­hings, lectures and essays.

Leopold Goldmann, who ran the exclusive tailor and fashion store in Vienna with his business partner Emanuel Aufricht, had announced a compe­tition in 1909 to build a new commercial building on Michaelerplatz.

Since none of the designs that had emerged from the archi­tec­tural compe­tition could convince the client, he commis­sioned Adolf Loos, who had declined to take part in the compe­tition despite Goldmann’s invitation, to draw up the plans.

In terms of design, Loos was given a free hand; Goldmann was only involved in the layout of floor plans.

Loos had handed over the execution of the building to the architect Ernst Epstein, who also drew the plans for the building appli­cation. This initially envisaged facades in the then conven­tional style.

In March 1910, the building permit was issued and construction began.

Loos traveled to Greece, Italy, Algiers and Morocco to select marble for his building.

In July 1910, Epstein, in consul­tation with the building autho­rities, changed the plans for the facades to purely perfo­rated ones with suggested horizontal bands for decoration.

In September of the same year, when the scaffolding was removed and the upper floors were smoothly plastered, the building police shut down the site. The municipal building authority insisted on the execution of the horizontal bands envisaged in the plans.

Loos rigorously refused on the grounds that he could not decorate the top of a house that stood on marble columns at the bottom. He suggested waiting to see the effect of the base floor and then deciding on the further decoration of the facades.

The press and the public had become aware of the procee­dings due to the shutdown of the construction site, and a storm of indignation erupted against the allegedly bare structure, which was dubbed a canal lattice house, a house without eyebrows (since the window roofing that was common at the time was missing), or even a monster of a house.

Loos finally made a new facade proposal and designed copper flower boxes for the windows of the upper floors. The proposal was presented to the press, met with accep­tance and was finally approved in May 1912.

Loos had already given a lecture to an audience of two thousand in the Sophiensaal in December 1911, in which he settled accounts with his critics. Loos found words of praise for his client Leopold Goldmann, who stood stead­fastly by his side at the moment when all of Vienna seemed to be attacking the building.

The business premises are located on the basement floors, on the upper floors there are apartments.

The ground floor and mezzanine are covered with Cipollino marble from Euboea, which Loos himself had selected in the quarries.

Four columns of the same material form an open vestibule, which is motively based on the portico of the neigh­boring Church of Saint Michael and integrates it into the historic buildings on the square.

An apparent swinging back of the facade is suggested in the area of the upper floors by the shaping of the corners and the cornices.

Above the capitals of the columns, which are not load-bearing due to the concrete frame construction, an iron crossbeam clad with copper is inserted.

Above this, the columns find their conti­nuation in the pilasters set between the bay windows.

In the mezzanine of the side facades, the bay windows are flanked by set columns.

For the deliber­ately unadorned upper zone, which extends over four stories, Loos had, according to his own state­ments, oriented himself on the house at Herrengasse No. 15/ Landhausgasse No. 2 by the architect Leopold Mayr.

These plaster surfaces were origi­nally colored gray, the frames of the otherwise plain windows were painted red.

The building was erected by the construction company Pittel+Brausewetter.

Loos had the store fittings made by English carpenters.

In 1944, the Looshaus was damaged by a bomb hit in the neigh­boring high-rise building Herrengasse.

Since 1947, the house has been listed as a histo­rical monument.

In the 1960s, the building housed a furniture store.

In 1987, Raiffeisenbank Wien bought the building and renovated it thoroughly.

The facade and the interior were restored to a condition largely similar to the original building.

In 2002, the Italian architect Paolo Piva carried out a renovation in the basement area. 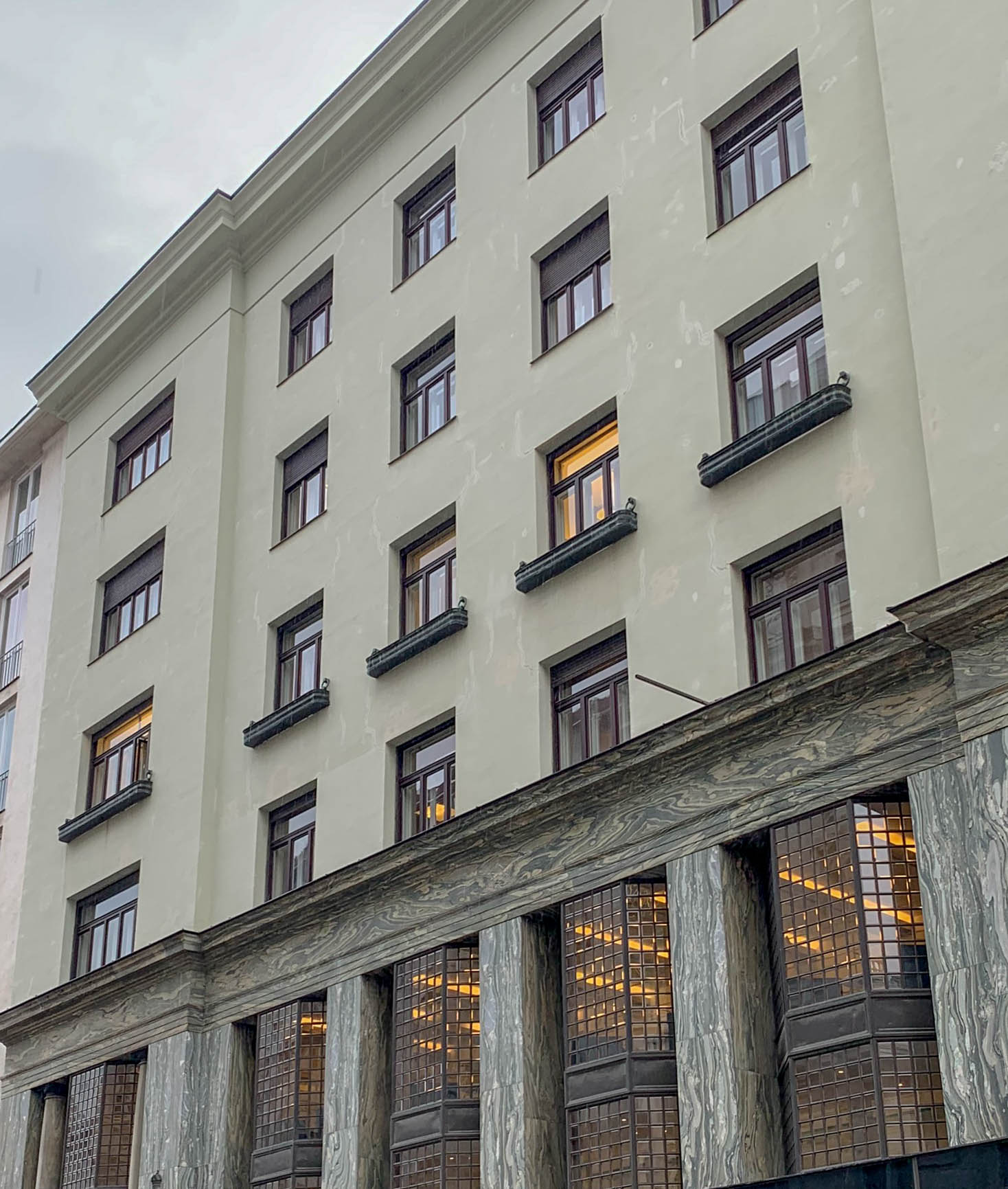 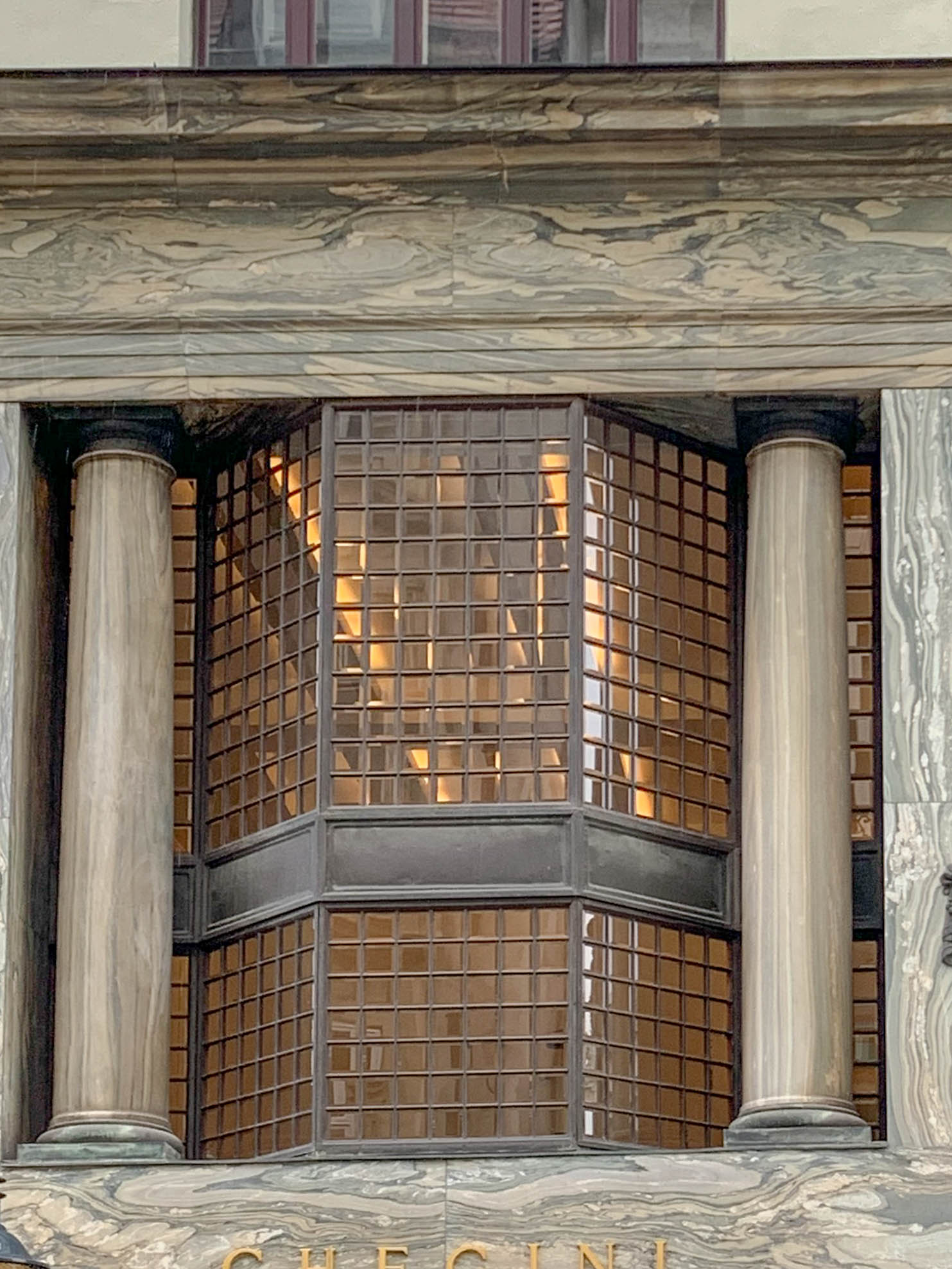 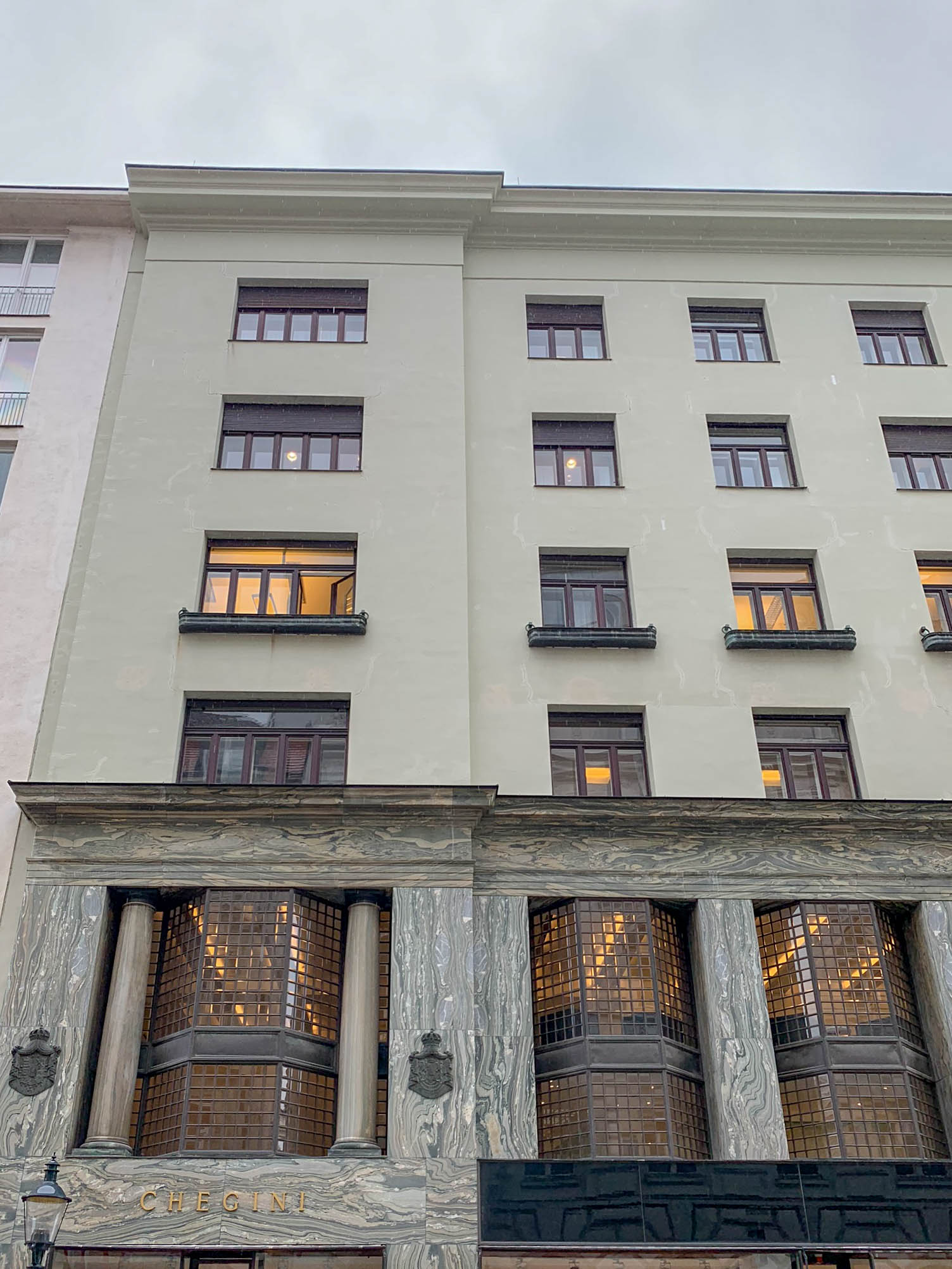 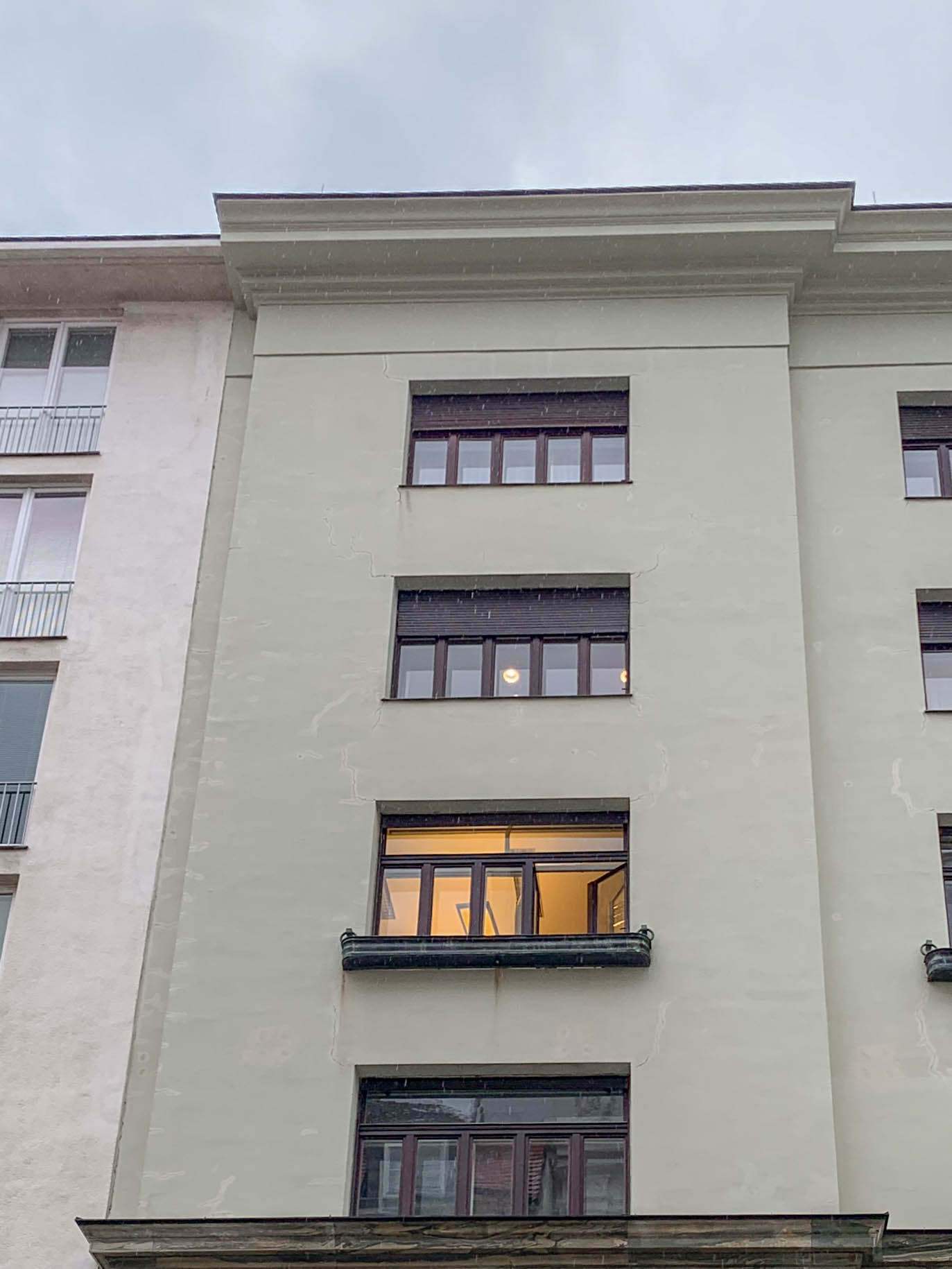 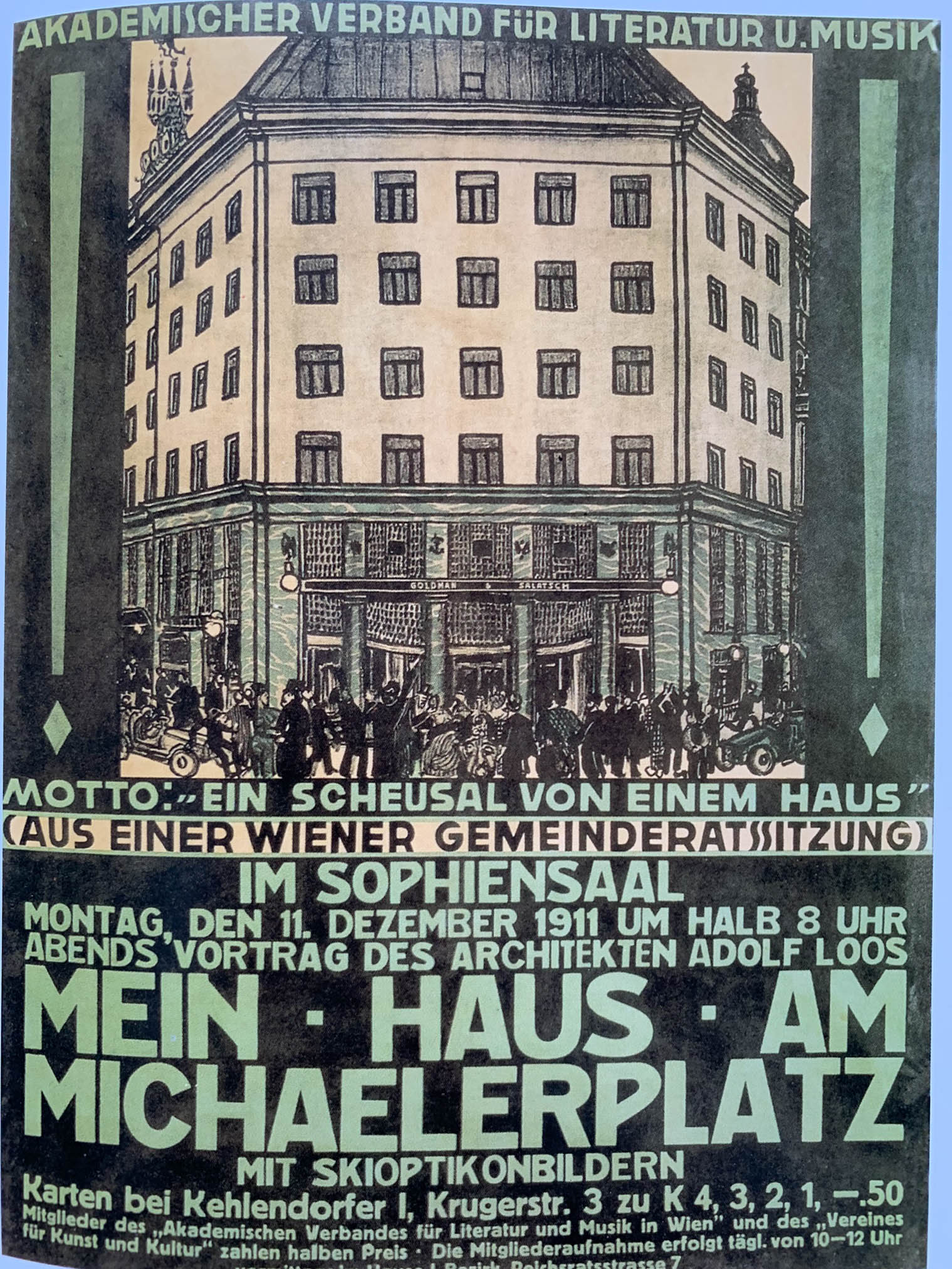 Poster for the lecture Mein Haus am Michaelerplatz by Adolf Loos in the Sophiensaal, 1911 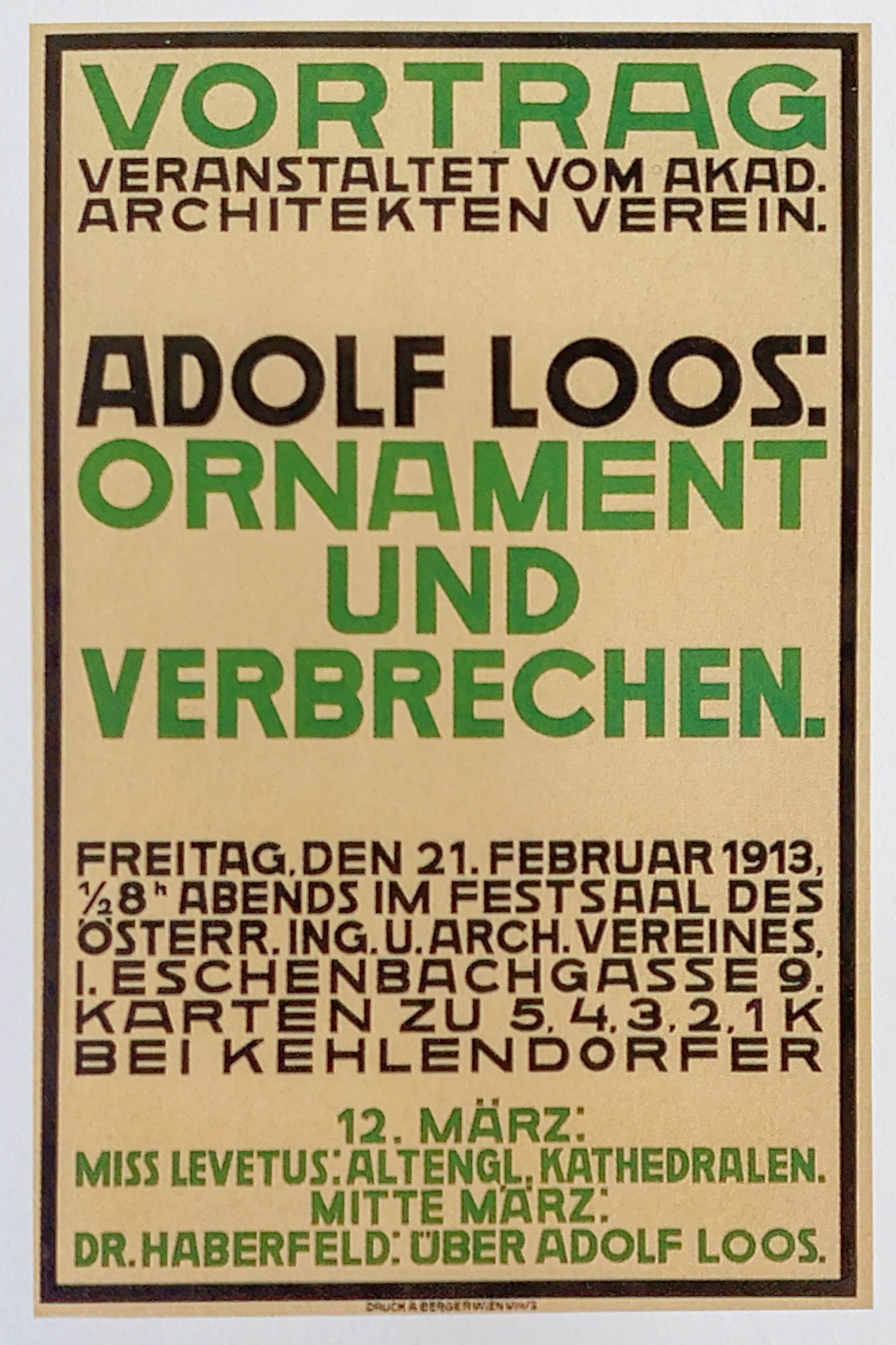 Poster for the lecture Ornament and Crime by Adolf Loos at the Austrian Society of Engineers and Architects, 1913 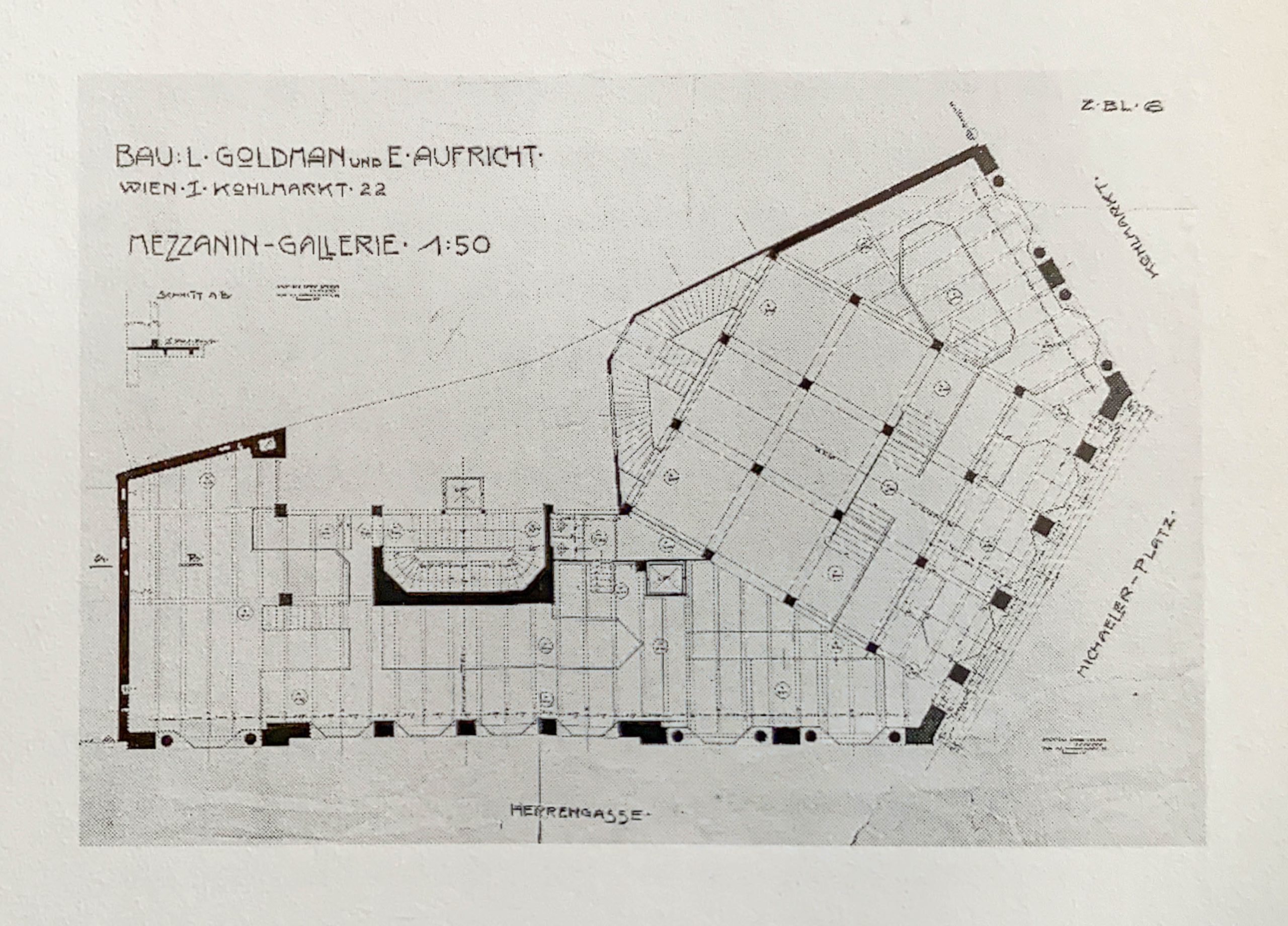