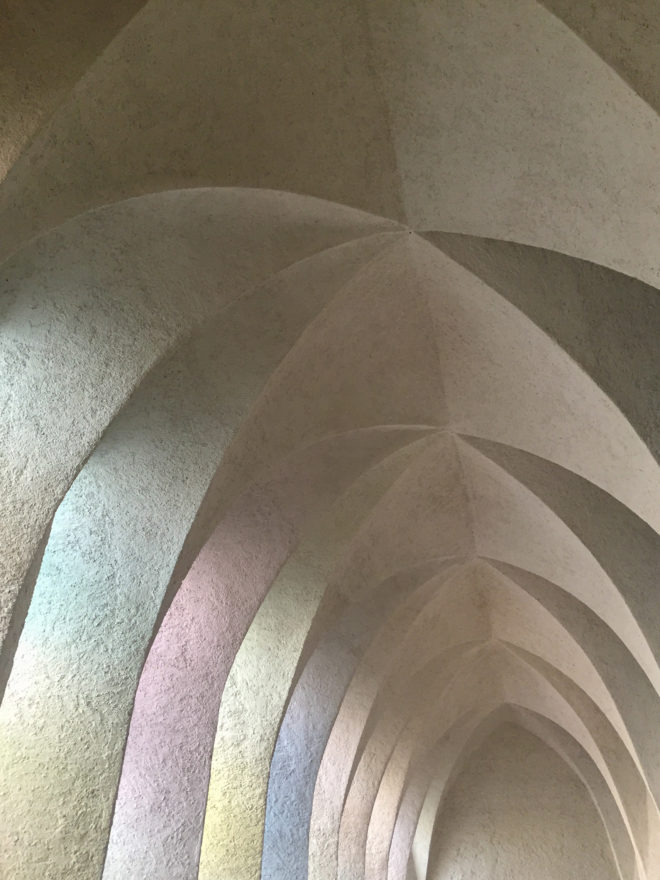 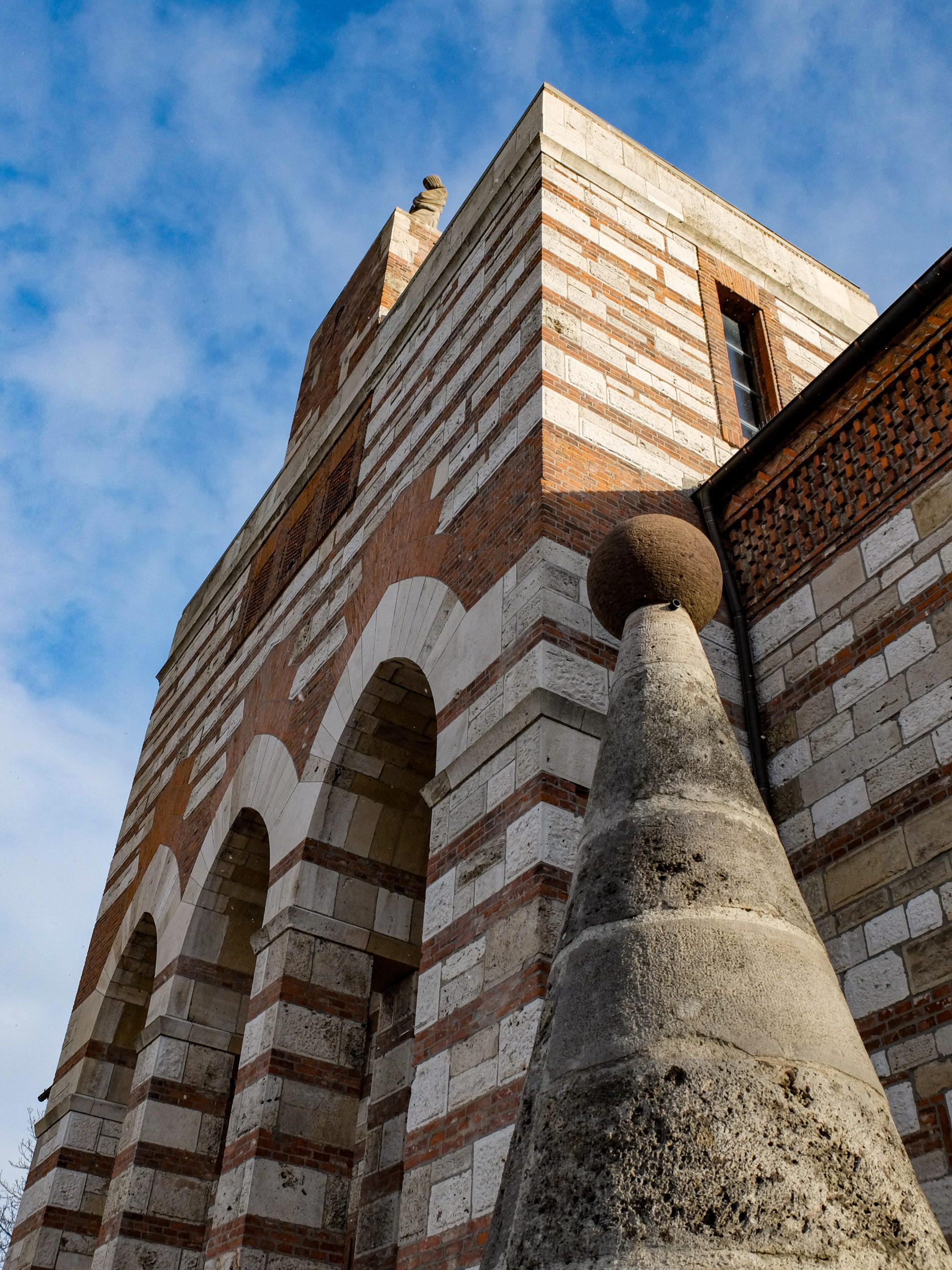 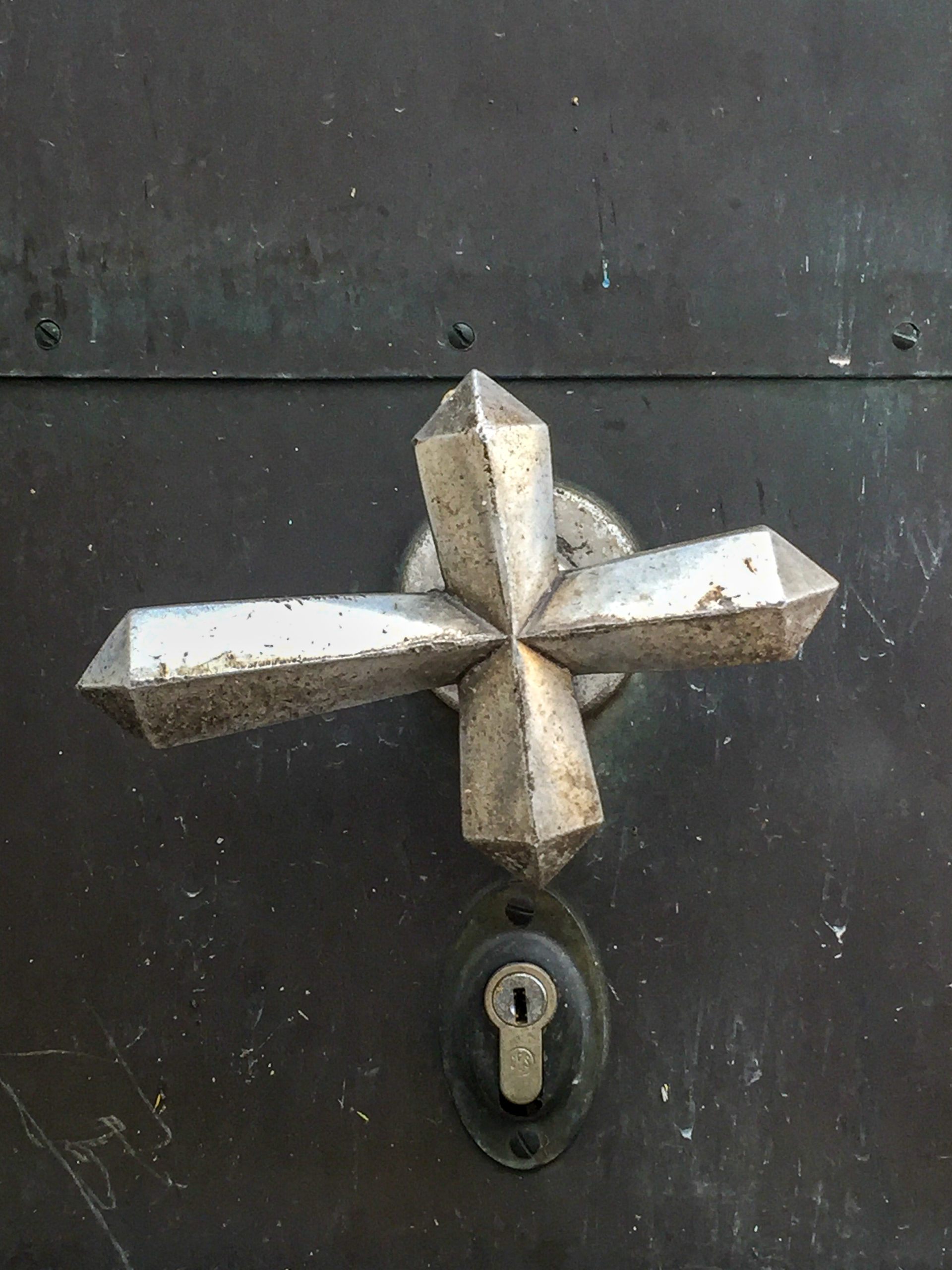 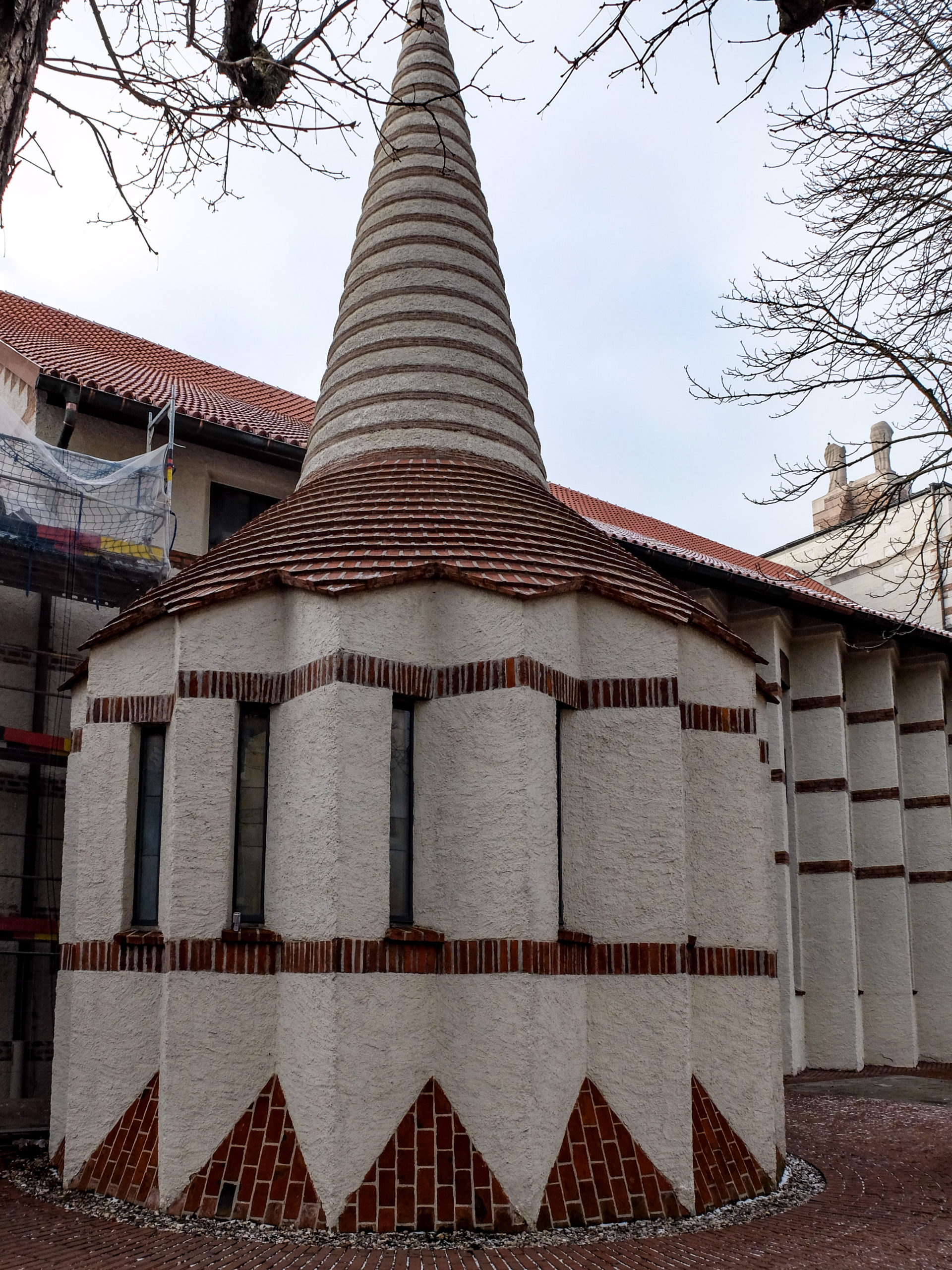 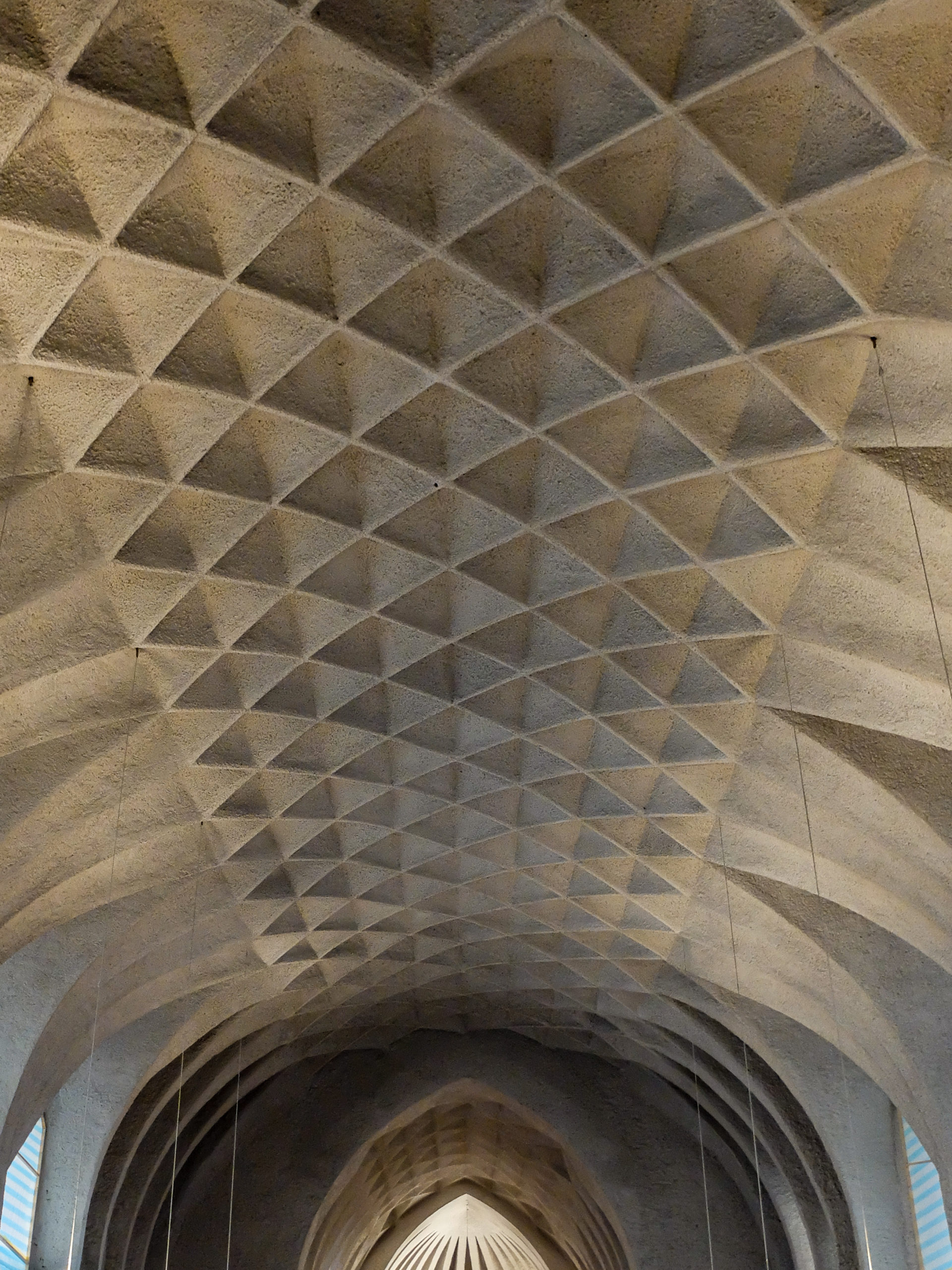 From 1841 Ulm and Neu-Ulm were developed into a fortress. Between 1857 and 1860, a neo-Romanesque garrison church was built, according to plans by Georg Freiherr von Stengel (1814–1882), which became too small for the growing congre­gation in the early twentieth century.

In 1904, a church building association was founded. The architect Dominikus Böhm parti­ci­pated in a first compe­tition with two designs.

Since there was not enough money for a new building due to inflation, Dominikus Böhm was initially commis­sioned in 1921 to redesign and expand the existing brick hall church by Stengel into a war memorial chapel.

The plans he developed provided for a funda­mental change in the ground plan and the facades.

The prede­cessor building, which was to remain recognizable only on the choir side, was integrated into the new building as a central nave and choir with a flanking south tower.

The recon­s­truction took place in two construction phases, whereby in the first from 1921 to 1923 initially only the trans­verse bar was completed, which formed a monumental square wall in front of the free-standing church.

In April 1923, work came to a standstill due to inflation, and it was only after a three-year break that work could be continued.

Instead of the origi­nally planned basilica, Böhm now opted for a three-nave hall church with jagged, sloping walls.

The idea of vaulting the naves as concrete sprayed vaults on wire mesh and casting concrete on formwork with iron reinforcement in the central nave as well as the plan for the chapel annexes were also developed during this phase.

From April 1926 to January 1927 Böhm’s design could be imple­mented and the church was finally conse­crated on October 8, 1927.

Dominkus Böhm, who was looking for ways to rhythmize the space, created with St. John Baptist an expressive spatial archi­tecture and a key building of modern sacred architecture.

The three-nave hall church is preceded in the west by a trans­verse bar with five entrance portals.

The exterior is struc­tured on its monumental northwest facade by Jura limestone ashlars, demolition material from the imperial fortress of Ulm, and bands of hand-made bricks.

The side walls are expres­sively designed with rough plaster and horizontal brick bands.

Just like the zigzag shape and the prominent cone of the chapel extension, they are typical features of Expressionist architecture.

The lower side buildings of the trans­verse wing refer dynami­cally to the raised central section, which is crowned by a cruci­fixion group by Paul Seiler.

In the forecourt, on the right, a lion created by sculptor Fritz Müller-Kamphausen still refers to St. Mark the Evangelist.

South of the nave is the Resurrection Chapel on a round floor plan.

Its zigzag-folded wall segments are crowned by a pointed roof cone with colorful tiles.

The fact that Böhm actually extended the existing garrison church can only be seen in the eastern section. Neo-Romanesque round arch friezes have been preserved on the chancel and tower.

The portals of the main façade lead into a vestibule that accom­mo­dates two devotional rooms and the organ loft above.

Across six bays, the corner piers taper toward the recessed chancel, which has a semicir­cular finial.

The two side aisles open into two chapels.

From the vestibule under the gallery, the view falls on the raised chancel and altar area, which onyx windows bathe in mystical light.

The entire interior is charac­te­rized by cast vaults of reinforced concrete. In the central nave, Böhm designed a lancet barrel with a sharply ridged cell structure, in the side aisles irregu­larly displaced spring vaults.

The southern aisle is adjoined first by a smaller chapel, then by the baptistery.

Through its round oculus the light falls down over the jagged wall into the otherwise windowless room.

Opposite on the north side is again a smaller passage chapel, which opens into the Resurrection Chapel.

Due to war and remodeling, little of the original furnis­hings survived.

The pews in the nave were designed by Böhm and are original.

Of the furnis­hings, the windows by Johann Thorn Prikker in parti­cular were destroyed and the cruci­fixion group above the portal was damaged.

After wartime destruction in March 1945, Böhm was commis­sioned in 1951 to restore the pre-war state largely true to the original.

Only with regard to the lighting did he have to bow to the wishes of the congre­gation: the side aisle windows were widened, and the previously windowless chancel was given glass panels, which were replaced by onyx lettering again in the 1980s.

In 1973, struc­tural damage to the foundation, west building and tower caused by the war was repaired by Franz Hartberger.

Since the 1980s, there has been a cross in the choir as well as a taber­nacle designed by the artist Reinhold Alexander Grübl, who also created the new onyx glazing and the bronze ambo.

From 2016 to 2020, Sankt Johann Baptist was exten­sively renovated. The church has been acces­sible again since January 2020. 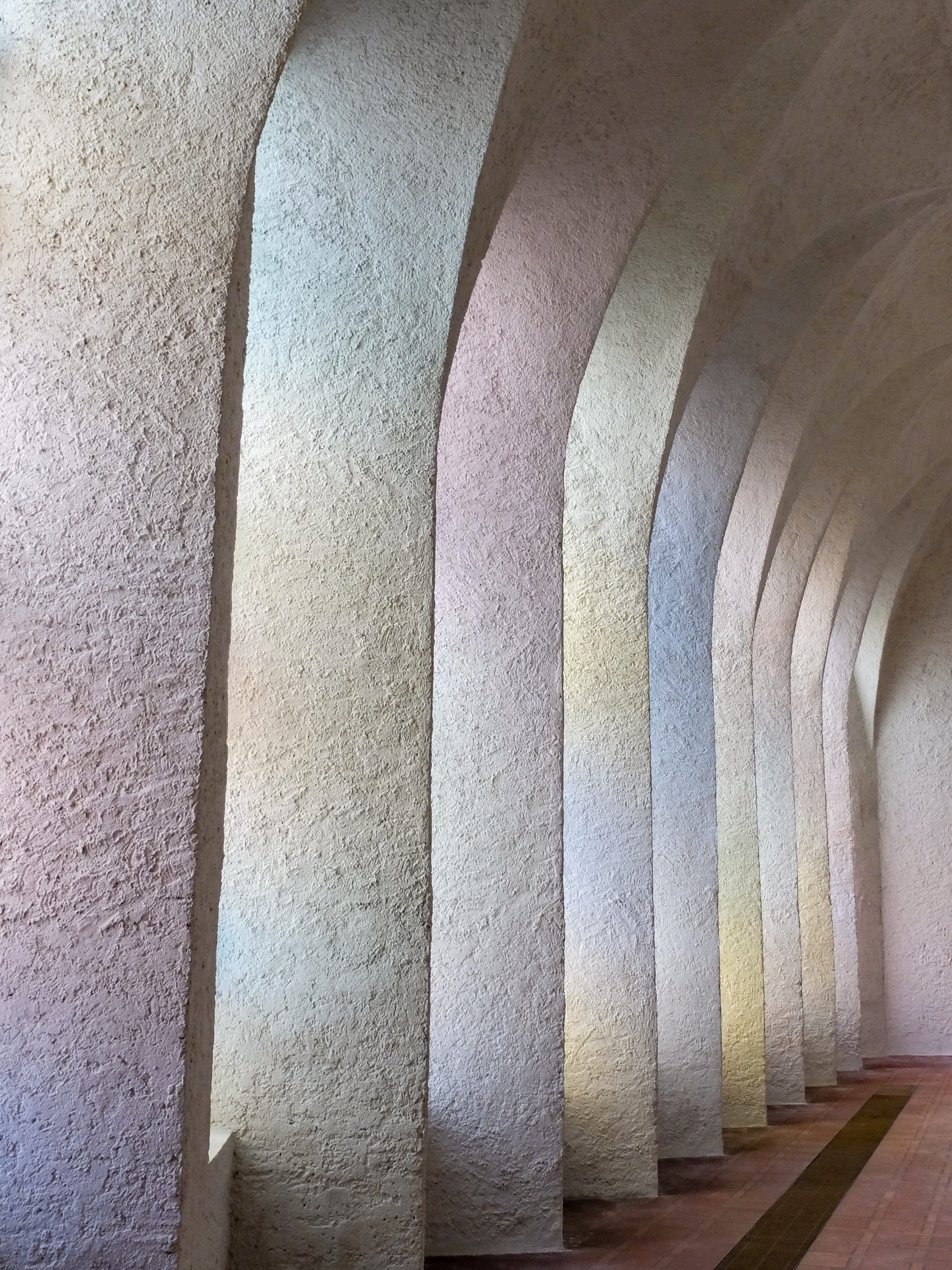 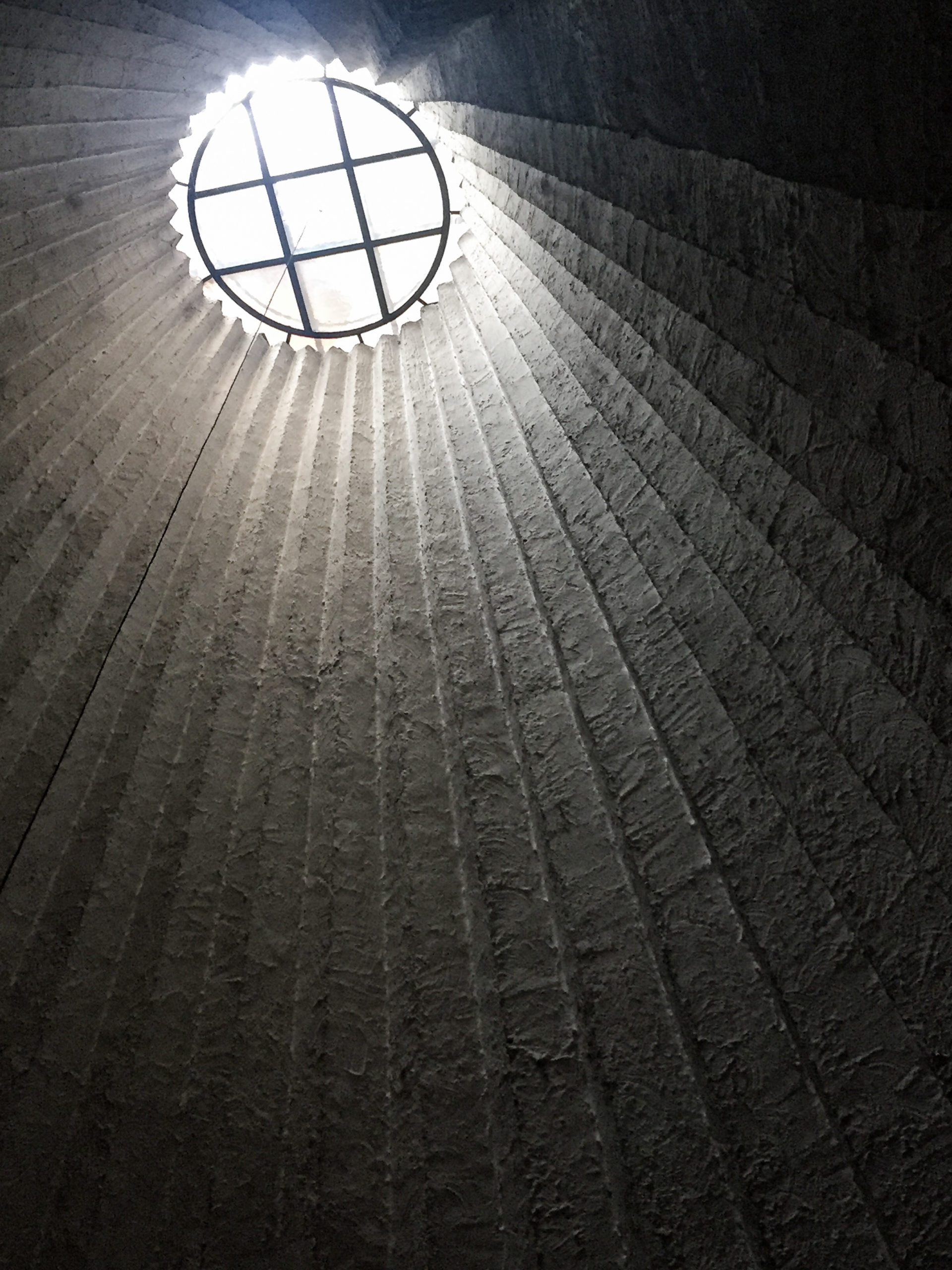 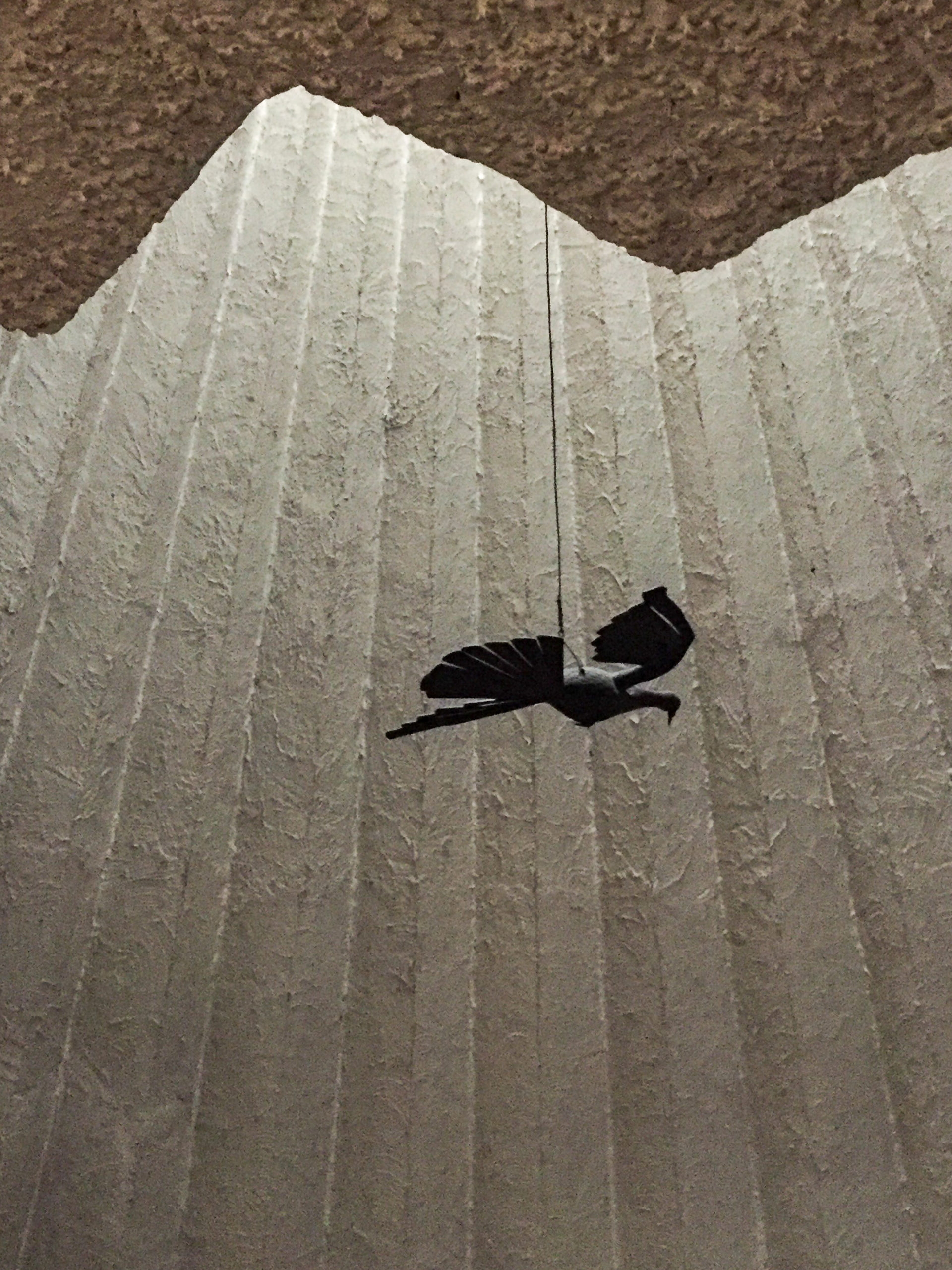 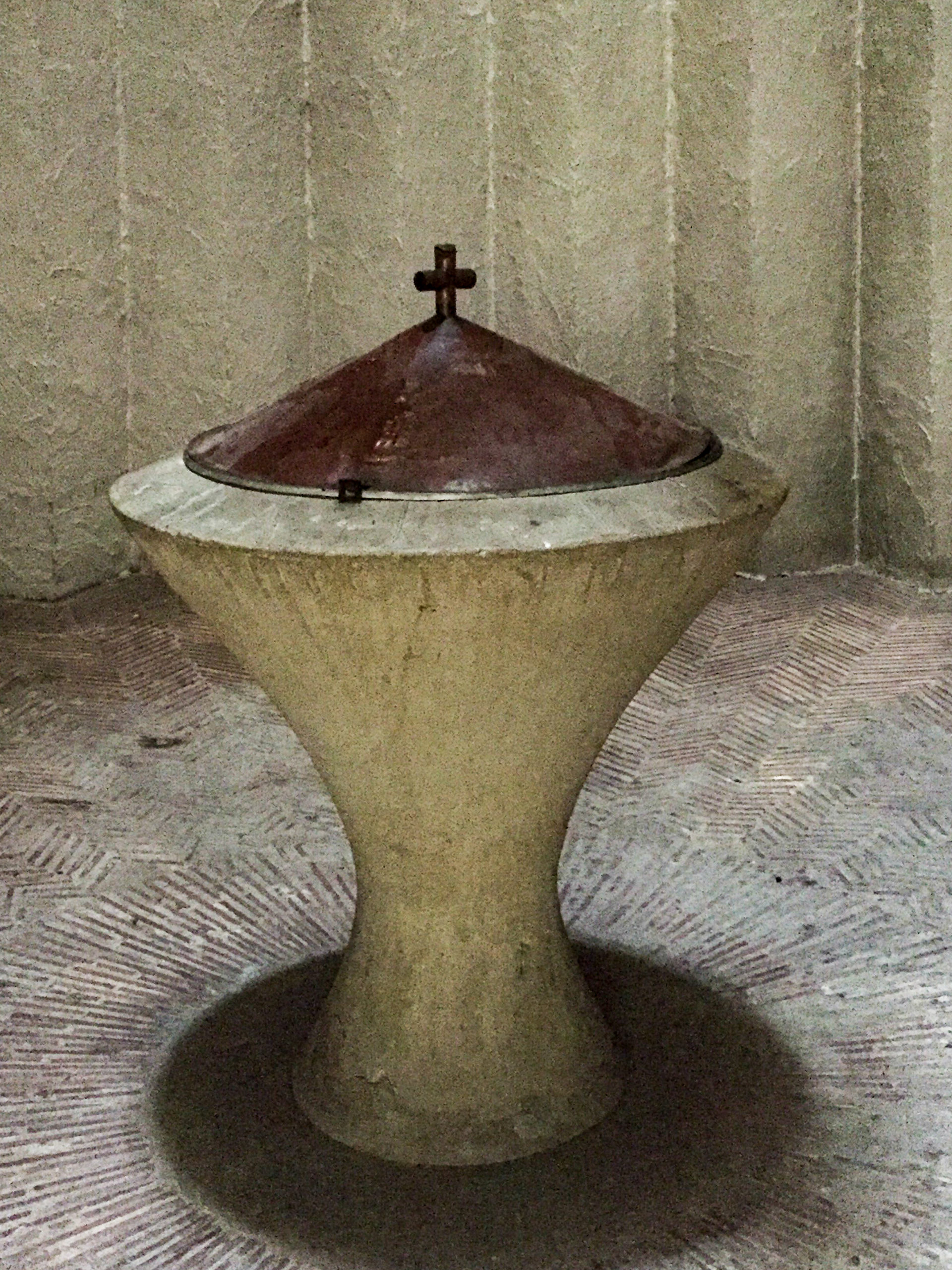 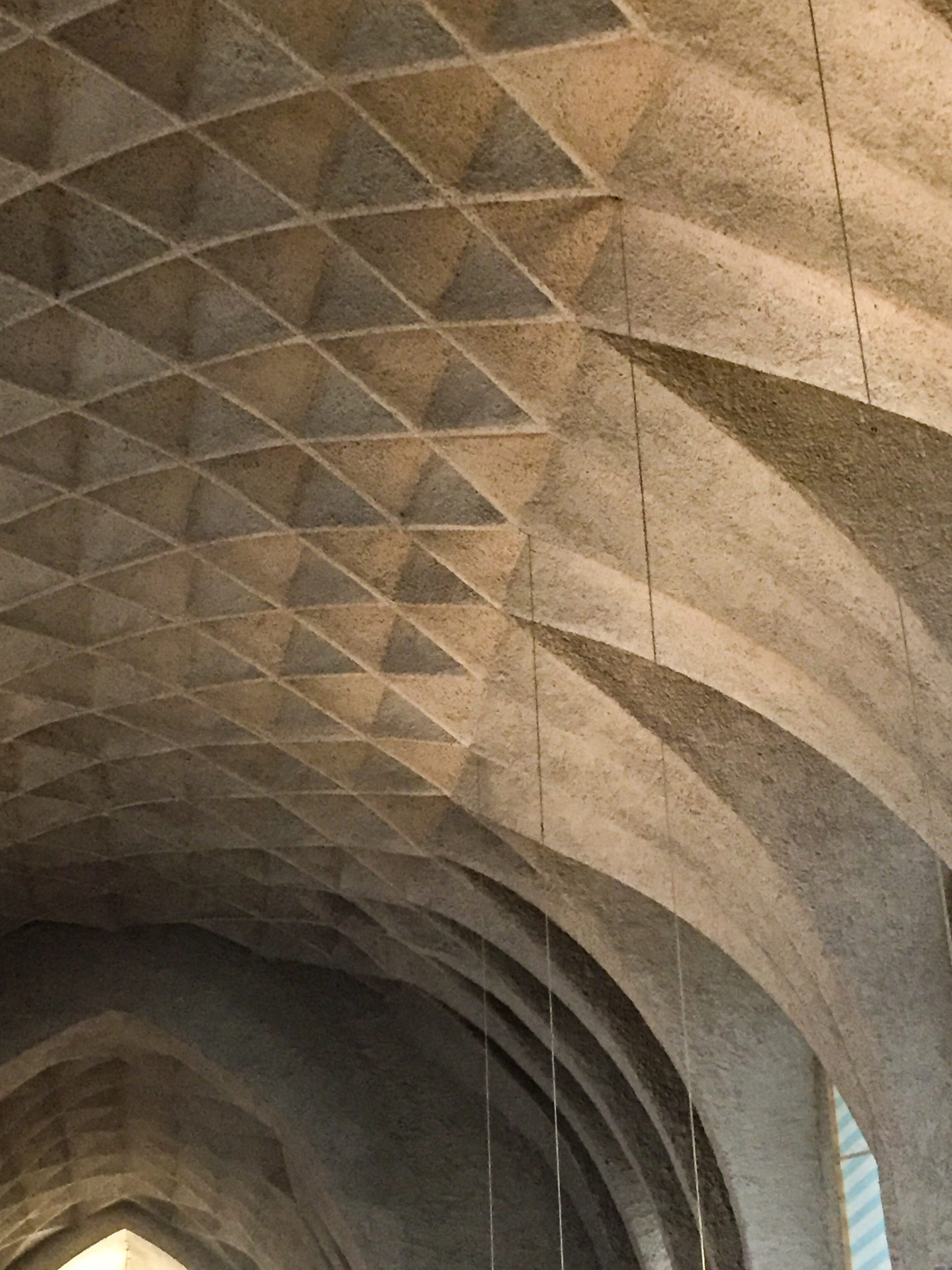