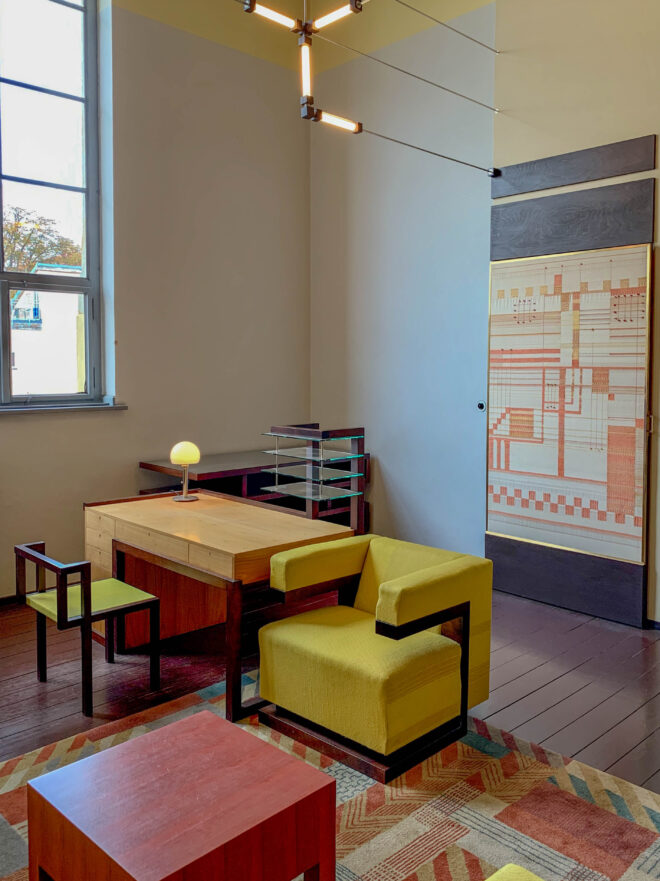 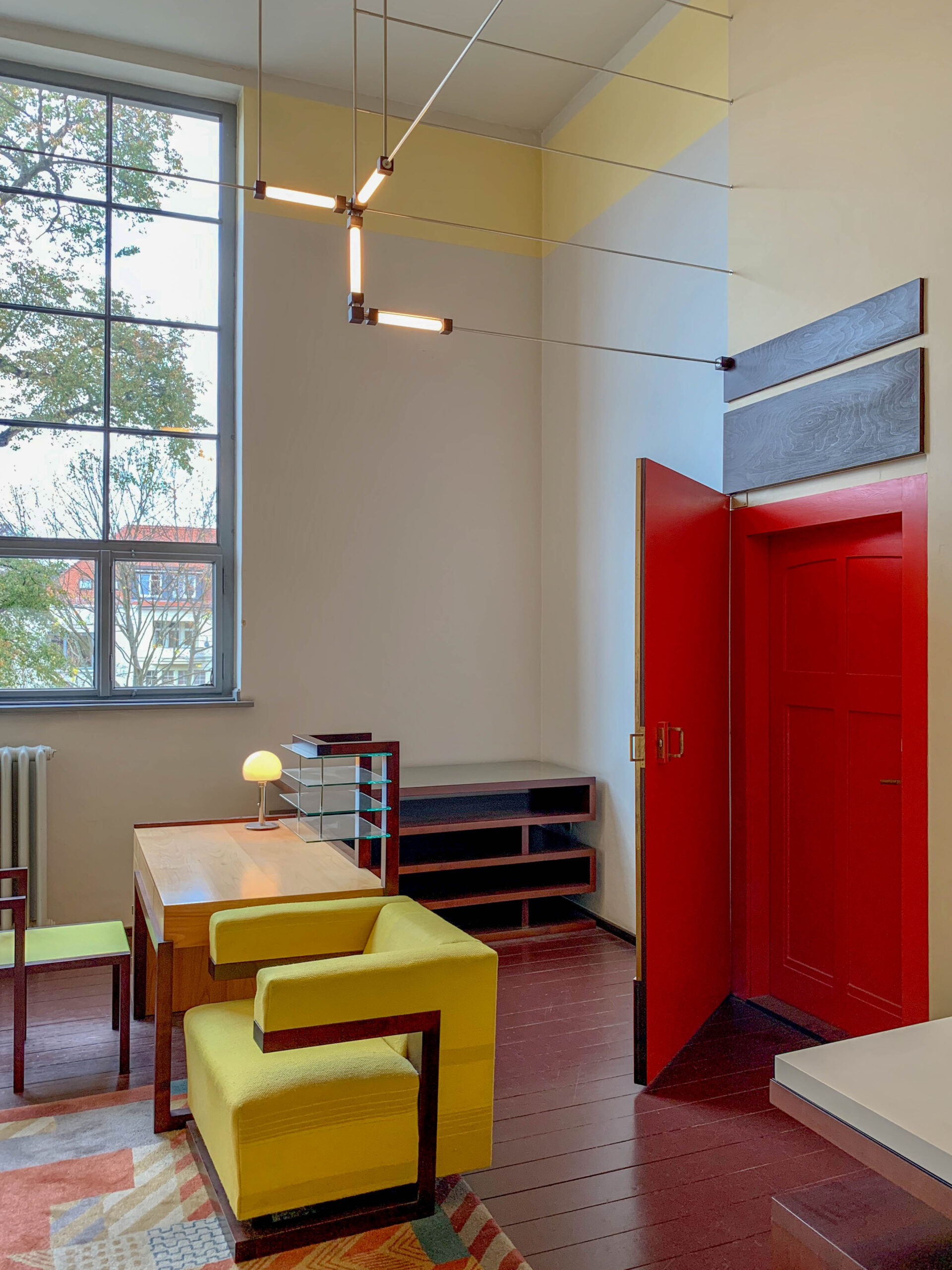 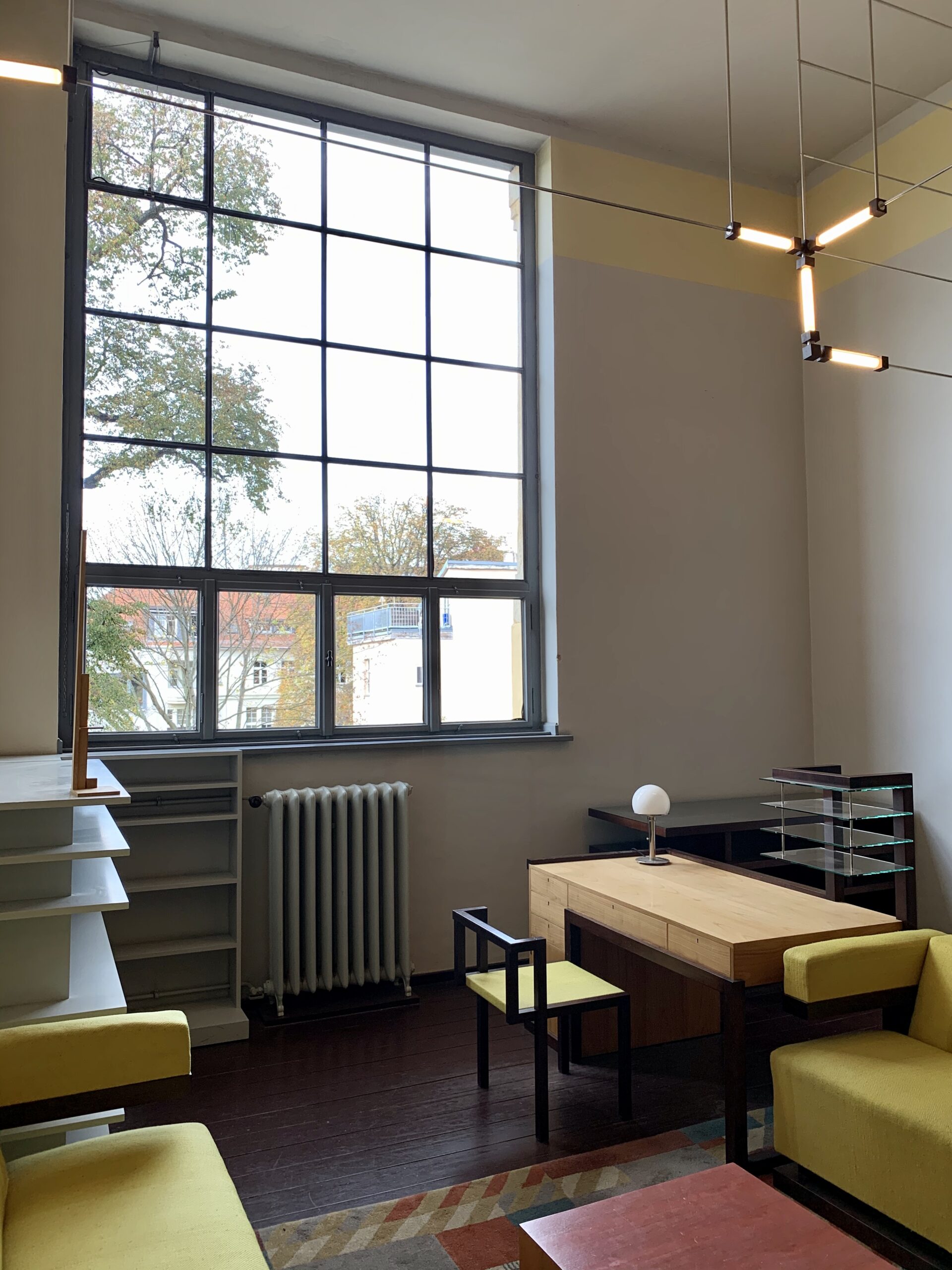 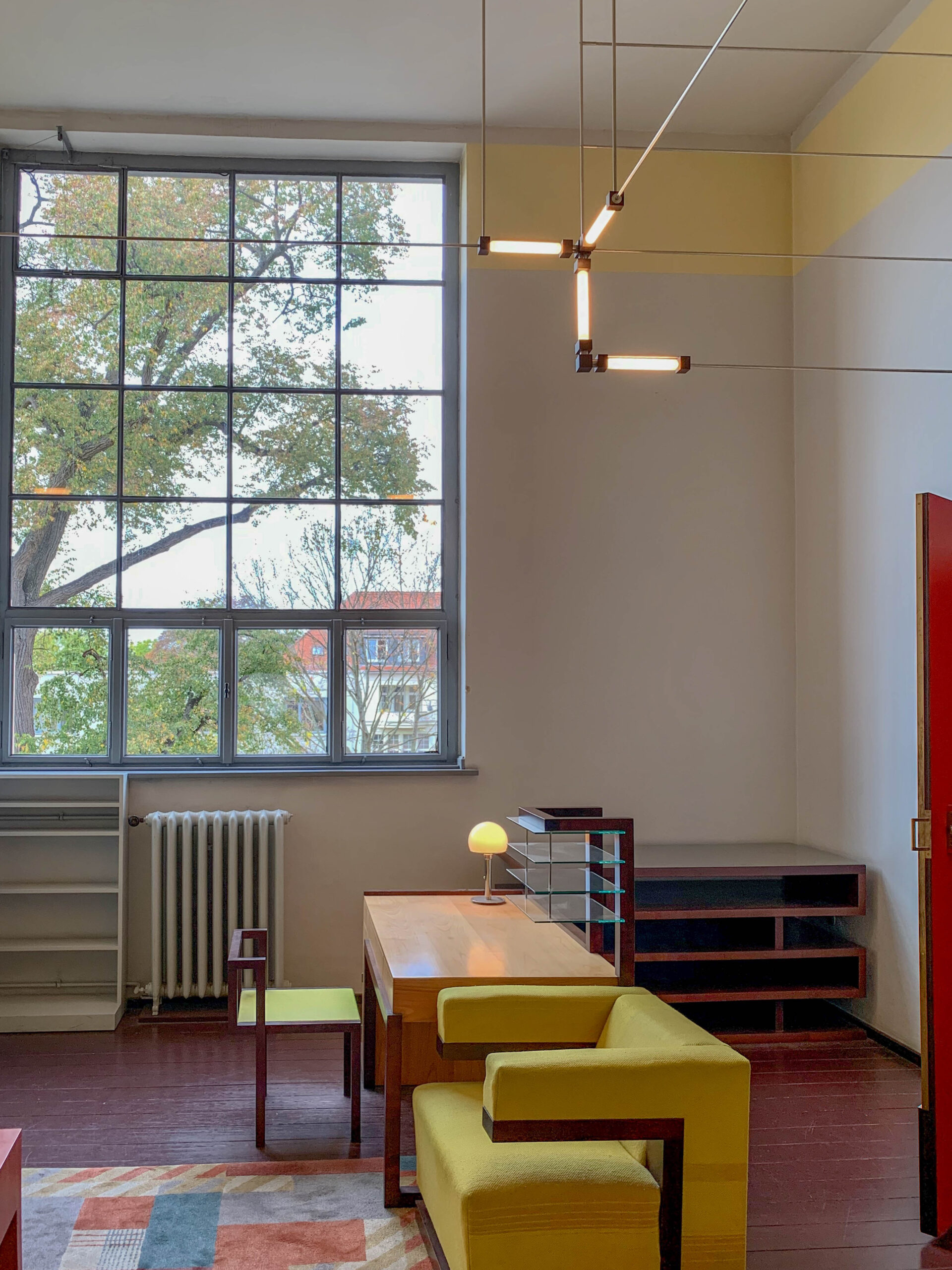 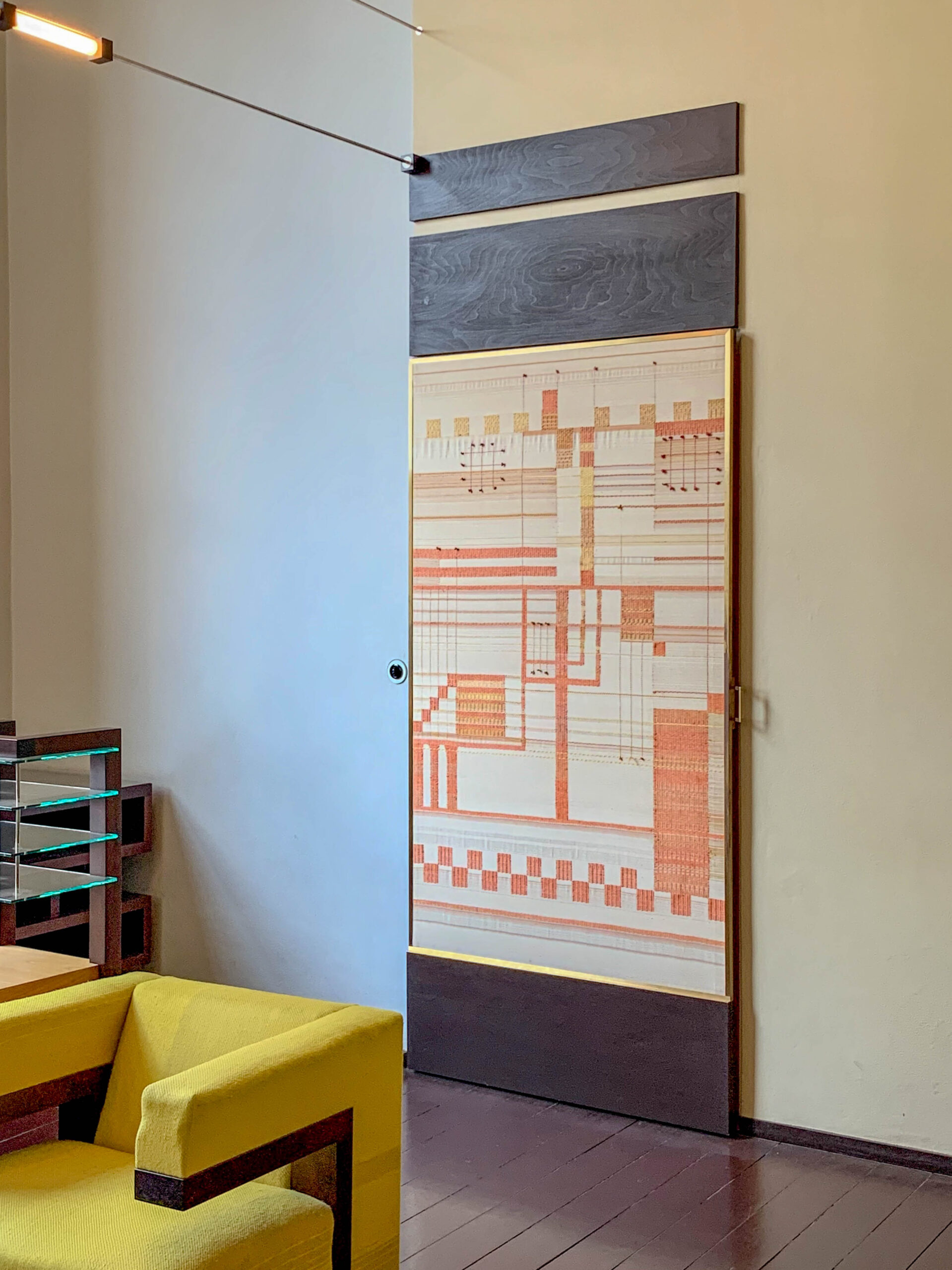 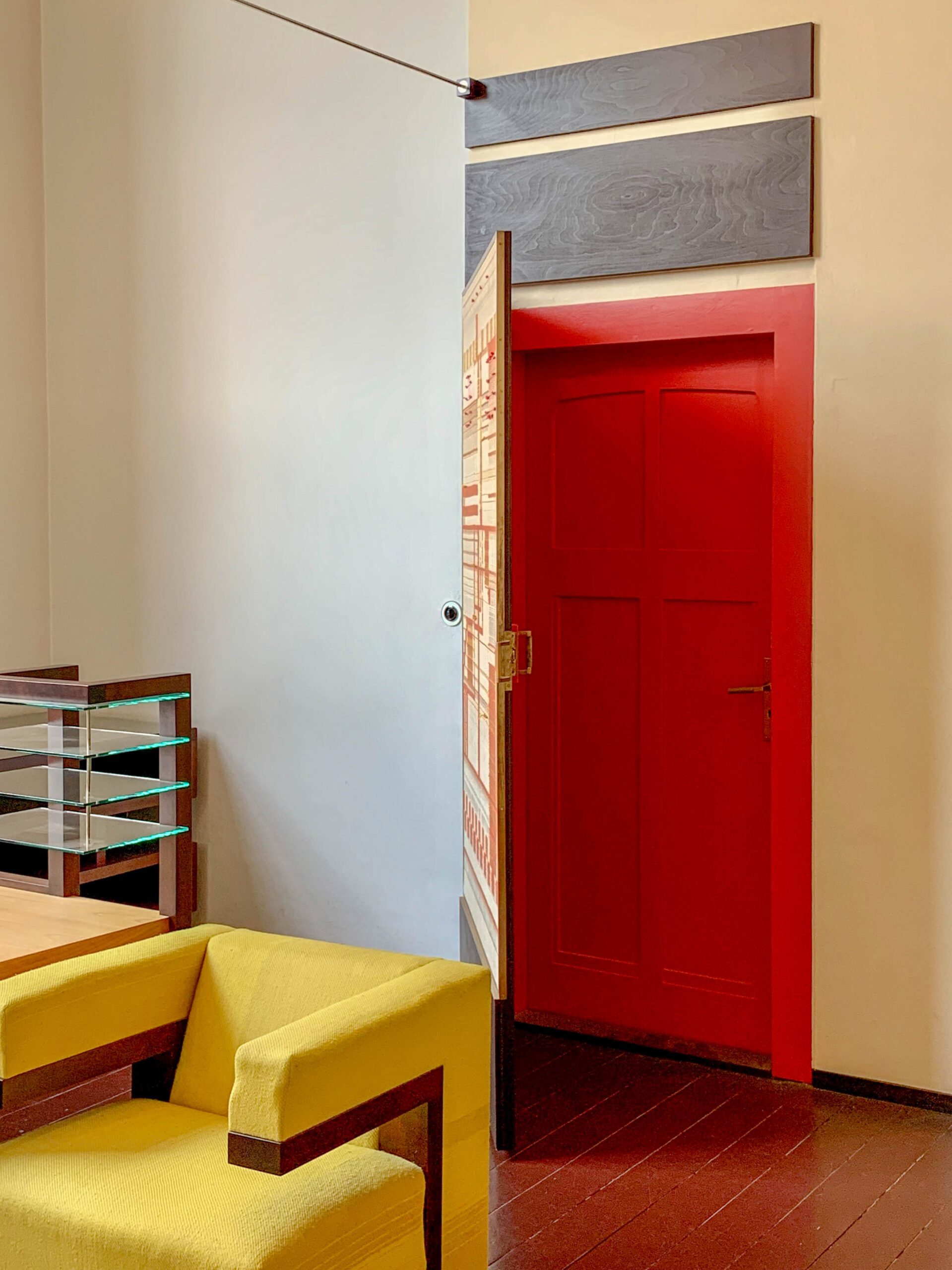 The listed Gropius Room in Weimar is consi­dered the first holistic spatial concept of classic modernism.

In the course of the renovation of the main building in 1997, the Bauhaus University Weimar had decided to recon­struct the former director’s room, which Walter Gropius had designed for the Bauhaus Exhibition in Weimar in 1923, and to furnish it as a usable working space.

Since its founding in 1919, the Bauhaus had repeatedly been subjected to massive public criticism. In June 1922, the Thuringian state government granted the Bauhaus a loan with the condition that it present the results of its work to the public in an exhibition.

A first exhibition concept was available in September 1922. In October 1922, a commission was appointed within the Bauhaus to organize the exhibition, which included the masters Oskar Schlemmer, Georg Muche and Josef Hartwig as well as the journeyman Kurt Schwerdtfeger and the apprentice Marcel Breuer.

The exhibition was adver­tised in 120 German train stations with a poster designed by Joost Schmidt and produced in the Bauhaus printing house, featuring Oskar Schlemmer’s Bauhaus signet.

The Gropius room, rectan­gular in origin, was parti­tioned off into a 5 x 5 x 5m cube.

Within this room, Gropius defined another cube as a resting zone through the square carpet and the thoughtful arran­gement of the furniture.

Additionally, this space was marked in height within the room by the sofa lighting. The influence of the artist group De Stijl can be clearly seen in this construc­tivist light object, whose design is influ­enced by Gerrit Rietveld.

The latter had designed the so-called lamp L40 for the consulting room of the doctor Dr. Hartog in Maarssen (Netherlands) in 1922.

The Gropius Room was created at the end of the phase at the Bauhaus marked by Expressionism.

At this point, the transition to construc­tivist and functio­nally deter­mined design was already apparent, at a time when Gropius himself, as Bauhaus director, was instru­mental in driving this change of direction.

The carpet in the director’s room is a design by Bauhaus student Benita Otte.

When the Bauhaus moved to Dessau, Gropius took the furnis­hings with him.

He partially incor­po­rated it into his new office, which was designed in a more functional style.

The original desk is now in his former home in Lincoln (USA). 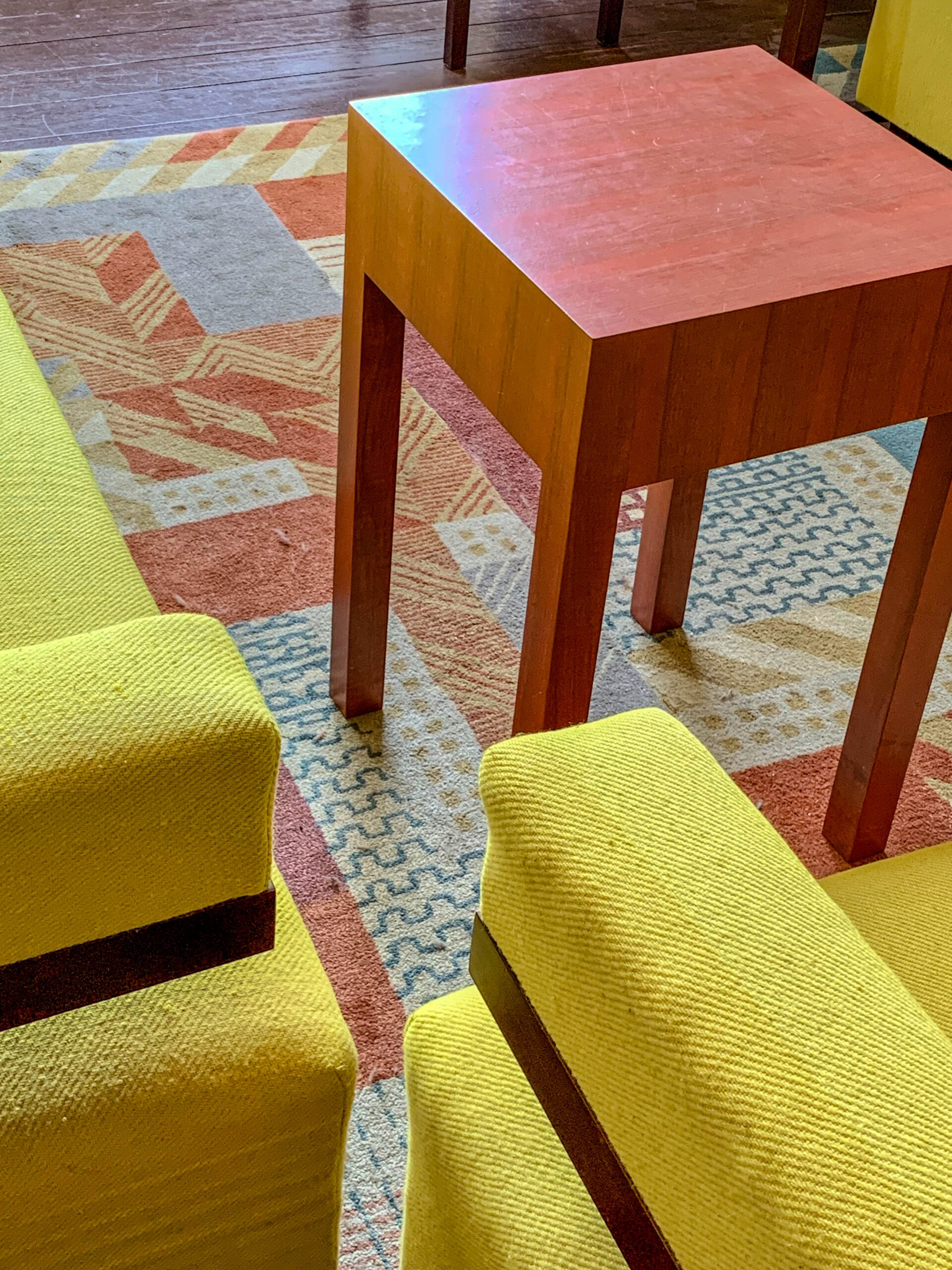 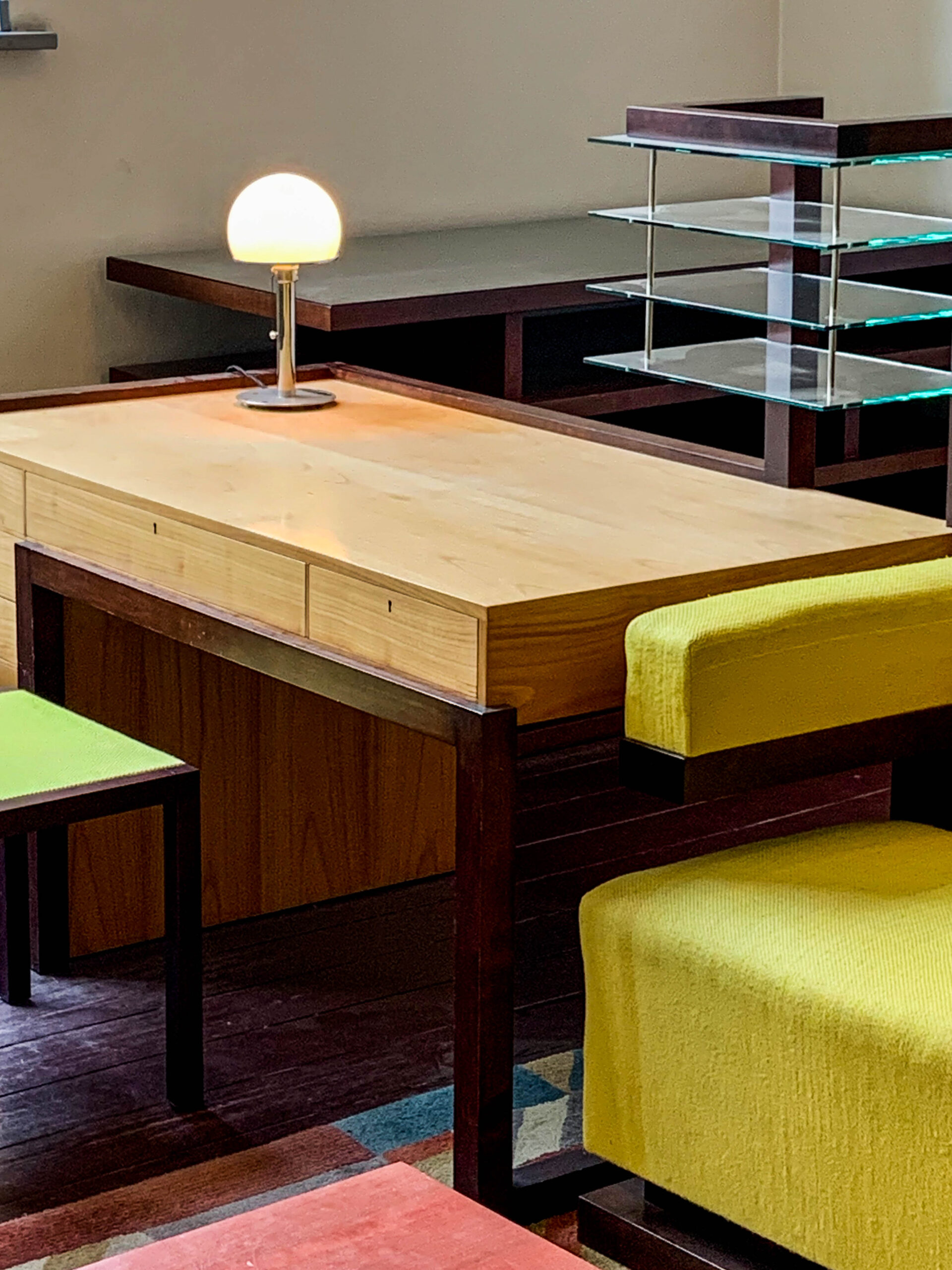 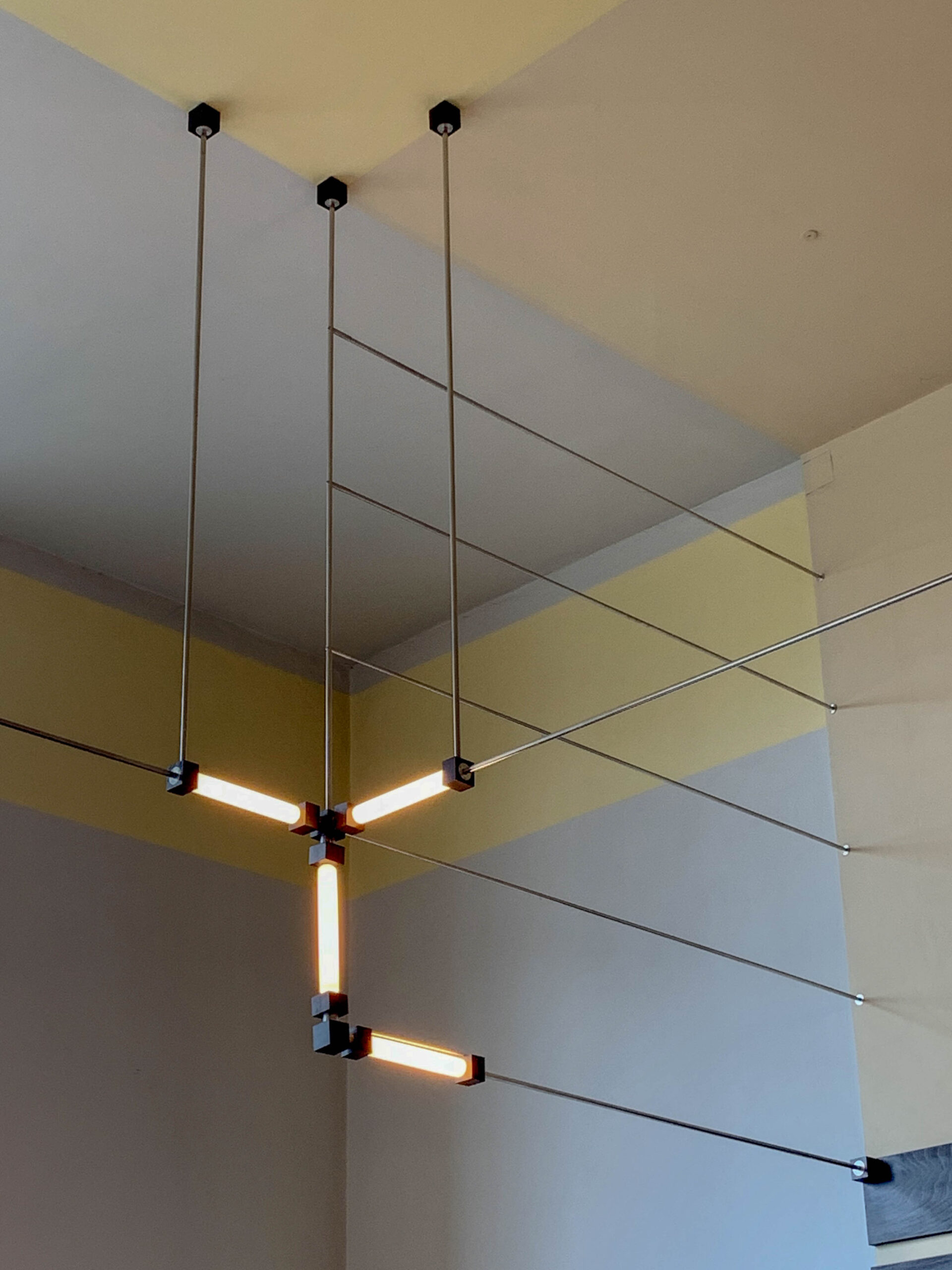 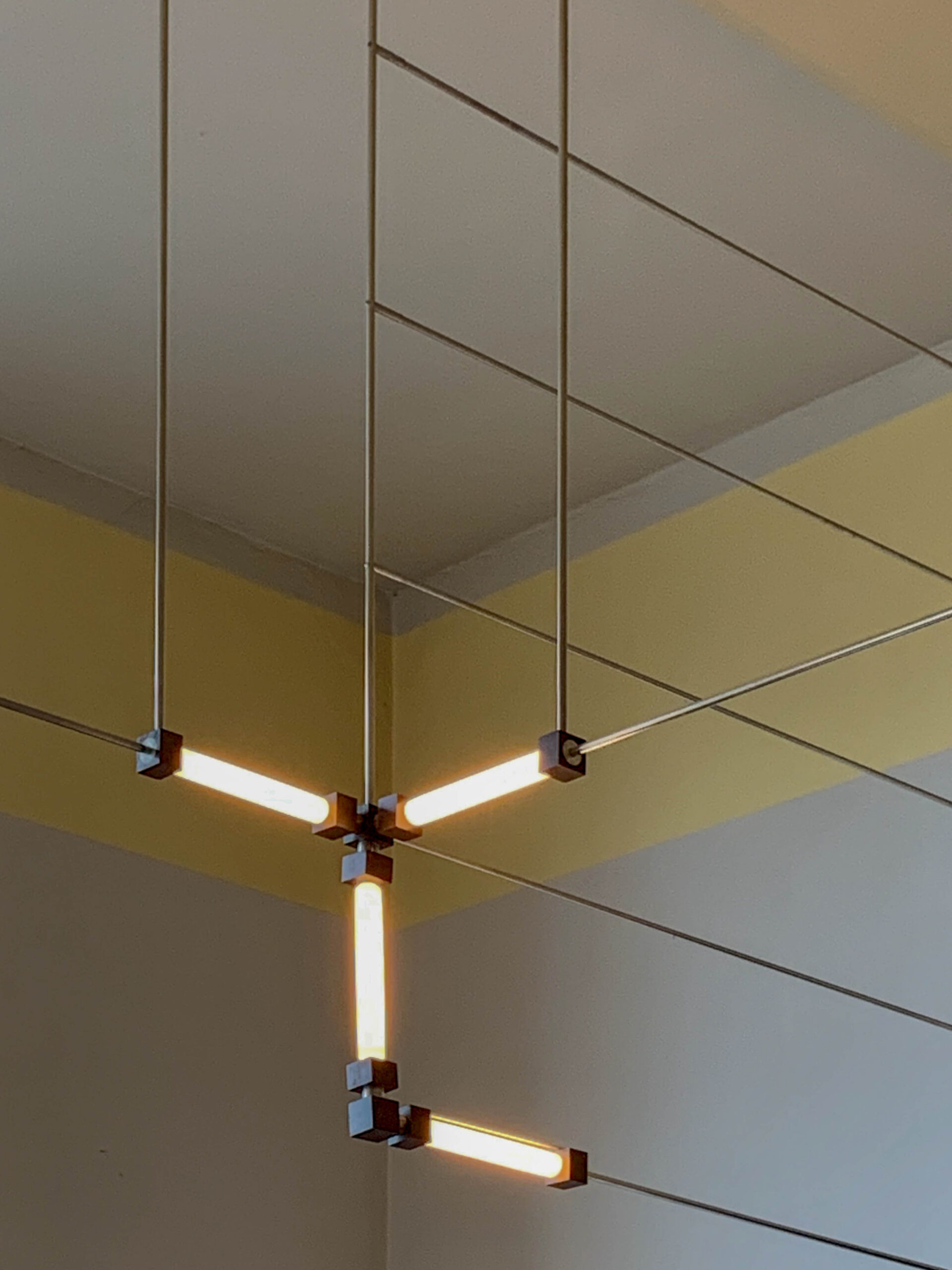 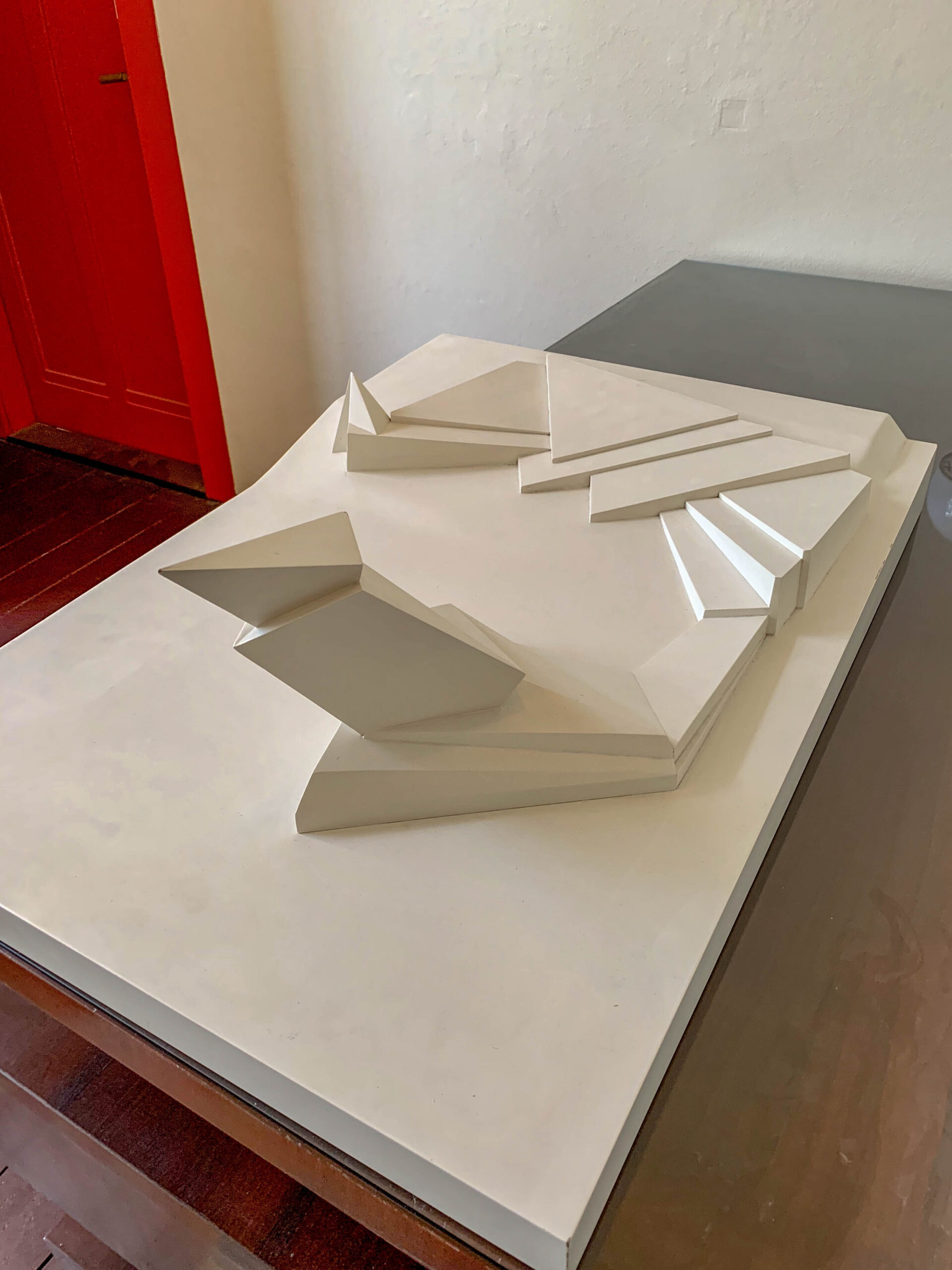